Racism and Slavery in the USA
1998
Aquemini 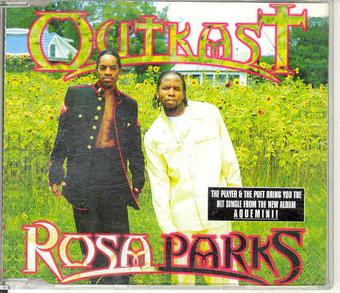 [Hook]
Ah ha, hush that fuss
Everybody move to the back of the bus
Do you wanna bump and slump with us
We the type of people make the club get crunk

[Verse 1:(Big Boi)]
Many a day has passed, the night has gone by
But still I find the time to put that bump off in your eye
Total chaos, for these playas, thought we was absent
We takin another route to represent the Dungeon Family
Like Great Day, me and my nigga decide to take the back way
We stabbing every city then we headed to that bat cave
A-T-L, Georgia, what we do for ya
Bull doggin hoes like them Georgetown Hoyas
Boy you sounding silly, thank my Brougham aint sittin pretty
Doing doughnuts round you suckas like then circles around titties
Damn we the committee gone burn it down
But us gone bust you in the mouth with the chorus now

I met a gypsy and she hipped me to some life game
To stimulate then activate the left and right brain
Said baby boy you only funky as your last cut
You focus on the past your ass'll be a has what
Thats one to live by or either that one to die to
I try to just throw it at you determine your own adventure
Andre, got to her station here's my destination
She got off the bus, the conversation lingered in my head for hours
Took a shower kinda sour cause my favorite group ain't comin with it
But I'm witcha you cause you probably goin through it anyway
But anyhow when in doubt went on out and bought it
Cause I thought it would be jammin but examine all the flawsky-wawsky
Awfully, it's sad and it's costly, but that's all she wrote
And I hope I never have to float in that boat
Up shit creek it's weak is the last quote
That I want to hear when I'm goin down when all's said and done
And we got a new joe in town
When the record player get to skippin and slowin down
All yawl can say is them niggas earned that crown but until then...