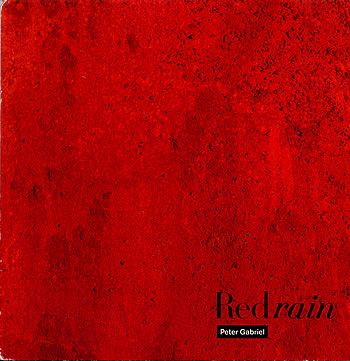 The song is a combination of several inspirations. The lyrics directly reference a recurring dream Gabriel was having where he swam in his backyard pool drinking cold red wine. Another version of the dream had bottles in the shape of people falling from a cliff. Once they smashed with impact onto the ground, the people-shaped bottles had red liquid coming out, and then it began to rain the same red liquid.

Earlier in his solo career, Gabriel had an idea for a movie, Mozo. In it, villagers were punished for their sins with a blood-red rain. "Red Rain" was to be the theme song. This idea was eventually scrapped, although there was a mention of Mozo in the song "On the Air" in Peter Gabriel (II). "Down The Dolce Vita", "Here Comes The Flood", and "Exposure" reference the Mozo story, as well.

Strongly percussive in nature, the song features two notable American drummers: Stewart Copeland from The Police played the hi-hat for the rain-like background sound and was requested by Gabriel due to his mastery of the instrument, while the rest of the drumming was provided by Gabriel's regular drummer Jerry Marotta. Author Daryl Easlea wrote that the song was "a brooding opening to the album" which reflected "two very current Eighties obsessions: AIDS and nuclear fallout". Stephen Thomas Erlewine has described it as "a stately anthem popular on album rock radio"
Red rain is coming down
red rain
red rain is pouring down
pouring down all over me

I am standing up at the water's edge in my dream
I cannot make a single sound as you scream
it can't be that cold, the ground is still warm to touch
this place is so quiet, sensing that storm

well I've seen them buried in a sheltered place in this town
they tell you that this rain can sting, and look down
there is no blood around see no sign of pain
hay ay ay no pain
seeing no red at all, see no rain