War in Viet Nam as seen from Italy and from the rest of the world
[1978]
Scritta da Don Walker, tastierista dei Cold Chisel. 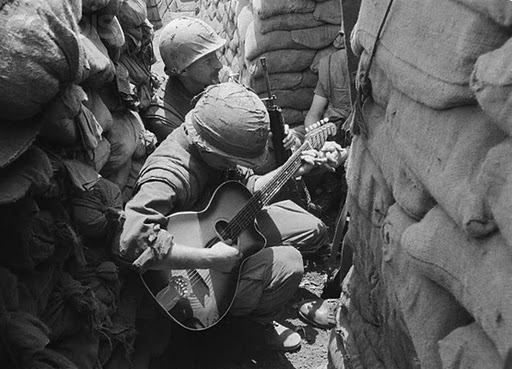 The mood of the song is typified by its first verse.

The remaining verses describe the singer's aimless drifting after his return to Australia: womanising, post traumatic stress disorder, addiction to speed and Novocaine, getting work on oil rigs and flying helicopters. He has travelled the world: "I've been back to South East Asia but the answer sure ain't there". The final refrain is "Well the last plane out of Sydney's almost gone", as the singer heads to Hong Kong for casual sex.

About the long forgotten dockside guarantees
How there were no V-dayheroes in 1973
How we sailed into Sydney Harbour
Saw an old friend but couldn't kiss her
She was lined, and I was home to the lucky land

And she was like so many more from that time on
Their lives were all so empty, till they found their chosen one
And their legs were often open
But their minds were always closed
And their hearts were held in fast suburban chains

And the legal pads were yellow, hours long, paypacket lean
And the telex writers clattered where the gunships once had been
But the car parks made me jumpy
And I never stopped the dreams
Or the growing need for speed and novacaine

So I worked across the country end to end
Tried to find a place to settle down, where my mixed up life could mend
Held a job on an oil-rig
Flying choppers when I could
But the nightlife nearly drove me round the bend

And I've travelled round the world from year to year
And each one found me aimless, one more year the more for wear
And I've been back to South East Asia
But the answer sure ain't there
But I'm drifting north, to check things out again

You know the last plane out of Sydney's almost gone
Only seven flying hours, and I'll be landing in Hong Kong
There ain't nothing like the kisses
From a jaded Chinese princess
I'm gonna hit some Hong Kong mattress all night long