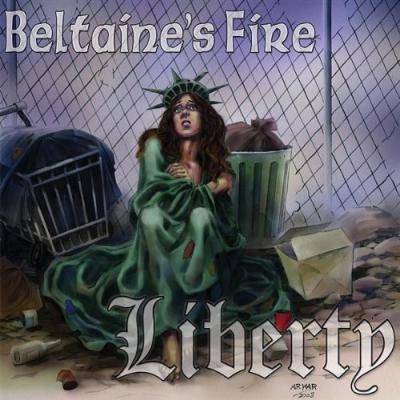 The song was originally written by their lead vocalist, Lynx, for a compilation put out to benefit Iraq Veterans Against the War and was based on first-person accounts from anti-war veterans of what it was like to be in Iraq as a member of the occupying army, all the while knowing that the war and the occupation are wrong. A solo version of it was published on the compilation 'A Line In the Sand', released by Wild Stallion Records in August 2007. The bands version is on their second album, Liberty.
Stepping out the barracks the desert sunrise
Illuminates the city but sand gets in my eyes,
Wearin body armor tryna believe that I’m bulletproof
This world is insane, I know son, I’m livin proof
life moves in mysterious ways
runnin through this city like I’m lost in a maze
I don’t speak the language and everyone is hostile
Gotta keep my eyes peeled for projectiles

Death happens daily when you least expect it
My buddy got abducted and got beheaded
This shit is fuckin crazy, war is hell
ain’t nothing like the war stories old folks tell
Cuz there ain’t no honor in occupying
This is not why I joined, but if I show defiance
I’ll get locked up, for insubordination
Meanwhile this army’s tryna rape a whole nation

I joined up to protect my own country,
defend it it to the death it to the death if you try to take it from me
and that’s the same reason the Iraqi’s fight
so who am I to say they’re wrong and we’re right?
now I lay awake at night arguing with myself
I’d give almost anything to be somewhere else
But the fact is, as I lay here on my mattress,
I know if I had been born in this spot on the map it’s

Damn sure which side I’d be on -
fightin against the occupation saying ‘bring it’
And it tears me apart inside, all my pain,
trapped in my brain and I might go insane
on the streets I find it drives me to distraction
Something I can’t afford, I let up a fraction
I’ll be in traction nursing my wounds
Maybe missin limbs ripped apart by the boom

And the ending? Well it’s no good pretending
This war is everlasting, who knows where they’re sending
Me next, I’m looking for some context
And if I die out here then my last request
Would be to see the liars who put me here
Charged with war crimes, let them taste my fear
I got 8 years from September 11
When I talked to the recruiter & told him that heaven

And hell couldn’t stop me from fightin back
Against the murdering bastards behind that attack
it’ all so simple, yet so complex
I got baited and switched, and that fact reflects
Everything that I know, everything that I say
got a picture from my kid sister just the other day
It was her at a rally in San Francisco
Glitter on her cheeks like she was going to a disco

And a homemade sign that ripped my heart right out
It said “support our troops, bring my brother home now!”
And I know somebody loves me, and prays at night
For the god she believes in to make things right
And I’m tired of war, wasn’t our mission accomplished?
So why are we still here? And when can we stop this?
cuz the people of iraq don’t want us here,
I can see it in their eyes, it’s hate and fear

And more then that, something cold and hard
A nation traumatized, I can see the scars
Of a brutal regime, a brutal opposition, a brutal invasion,
and brutal impositions, from all sides
getting caught in this red tide,
my homies at home think of me when they ghostride
but I’m not a ghost yet, and I’m not tryna be
and I’m just tryna get home to my own family

and still….
Every day the war rages on

And still
Every night the war rages on