>>> I have loved this song ever since Garth Brooks has sung it. For...

A song about the Christmas Truce of 1914 during the World War I when British and French troops ceased hostilities on Christmas Eve and Christmas Day. 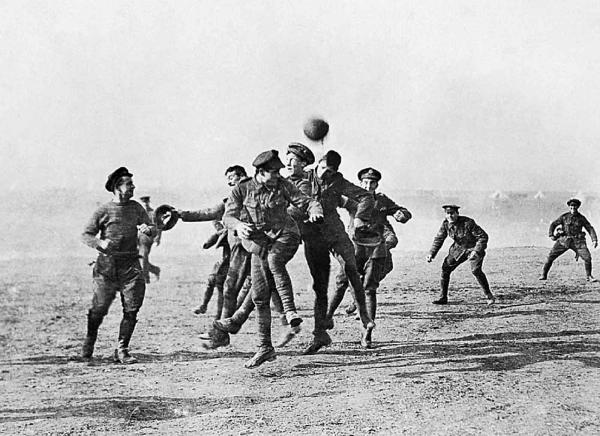 A brief part of a 10 page letter written by an unknown British soldier that records events and incidents with the Germans on December 24, 1914.

This will be the most memorable Christmas I've ever spent or likely to spend: since about tea time yesterday I don't think theres been a shot fired on either side up to now. Last night turned a very clear frost moonlight night, so soon after dusk we had some decent fires going and had a few carols and songs. The Germans commenced by placing lights all along the edge of their trenches and coming over to us—wishing us a Happy Christmas etc. They also gave us a few songs etc. so we had quite a social party. Several of them can speak English very well so we had a few conversations. Some of our chaps went to over to their lines. I think theyve all come back bar one from 'E' Co. They no doubt kept him as a souvenir. In spite of our fires etc. it was terribly cold and a job to sleep between look out duties, which are two hours in every six.
First thing this morning it was very foggy. So we stood to arms a little longer than usual. A few of us that were lucky could go to Holy Communion early this morning. It was celebrated in a ruined farm about 500 yds behind us. I unfortunately couldn't go. There must be something in the spirit of Christmas as to day we are all on top of our trenches running about. Whereas other days we have to keep our heads well down. We had breakfast about 8.0 which went down alright especially some cocoa we made. We also had some of the post this morning. I had a parcel from B. G's Lace Dept containing a sweater, smokes, under clothes etc. We also had a card from the Queen, which I am sending back to you to look after please. After breakfast we had a game of football at the back of our trenches! We've had a few Germans over to see us this morning. They also sent a party over to bury a sniper we shot in the week. He was about a 100 yds from our trench. A few of our fellows went out and helped to bury him.
About 10.30 we had a short church parade the morning service etc. held in the trench. How we did sing. 'O come all ye faithful. And While shepherds watched their flocks by night' were the hymns we had. At present we are cooking our Christmas Dinner! so will finish this letter later.
Dinner is over! and well we enjoyed it. Our dinner party started off with fried bacon and dip-bread: followed by hot Xmas Pudding. I had a mascot in my piece. Next item on the menu was muscatels and almonds, oranges, bananas, chocolate etc followed by cocoa and smokes. You can guess we thought of the dinners at home. Just before dinner I had the pleasure of shaking hands with several Germans: a party of them came 1/2way over to us so several of us went out to them. I exchanged one of my balaclavas for a hat. I've also got a button off one of their tunics. We also exchanged smokes etc. and had a decent chat. They say they won't fire tomorrow if we don't so I suppose we shall get a bit of a holiday—perhaps. After exchanging autographs and them wishing us a Happy New Year we departed and came back and had our dinner.
We can hardly believe that we've been firing at them for the last week or two—it all seems so strange. At present its freezing hard and everything is covered with ice…
Oh, the snowflakes fell in silence
Over Belleau Wood that night
For a Christmas truce had been declared
By both sides of the fight
As we lay there in our trenches
The silence broke in two
By a German soldier singing
A song that we all knew

Though I did not know the language
The song was "Silent Night"
Then I heard my buddy whisper,
"All is calm and all is bright"
Then the fear and doubt surrounded me
'Cause I'd die if I was wrong
But I stood up in my trench
And I began to sing along

No, heaven's not beyond the clouds
It's for us to find it here.

I have loved this song ever since Garth Brooks has sung it. For I had three Uncles in the war plus my stepfather. So this song means a lot to me. It is not just words It is a heartfelt feeling of what they went through. For I can not even imagine what it was like back then. For I ng.cry each time I hear this song.