Fascist and Nazist mass slaughters in Italy and Europe 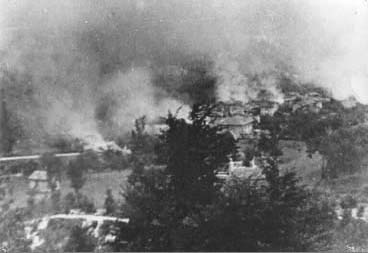 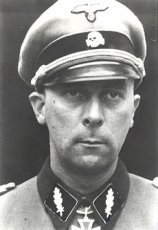 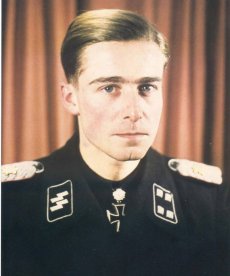 An SS is among you
from Time Magazine

When the explosion ripped through the hot summer air early one morning last week, residents of the quiet village of Traves (pop. 357) in the Vosges Mountains of France at first thought they were Bastille Day firecrackers. But word quickly spread that Le Renfort, the small, neat vacation home of the quiet, graying man known locally as "the German," was afire. Curious villagers gathered to watch the blaze and were still there when firemen pulled a charred body out of the library. Muttered Ernest Rigoulot, the village mayor: "I wanted him to leave. We pressured him, but he didn't want to. Too bad for him."

Infamous Atrocities. "The German" was Joachim Peiper. He had bought a plot of land in Traves twelve years ago and eventually began spending most of his time there. But his plump wife did the shopping, and townspeople rarely saw or even thought about Peiper himself. Then, not long ago, Peiper, 61, made an application for a permanent-residence permit. A check of his background revealed that he had not only been an adjutant to SS Chief Heinrich Himmler but was the notorious commander of Combat Group Peiper, which had killed at least 350 American prisoners and Belgian civilians during the 1944 Battle of the Bulge. In the most infamous of his atrocities, the so-called Malmedy massacre, 86 American prisoners of war were shot down in a snow-covered Belgian field. A war-crimes trial death sentence was later commuted and Peiper was released from Landsberg prison in 1956.

The revelations about Peiper's background shocked Traves. The local Communist Party started a campaign against him, and tracts announcing "A war criminal, an SS, is among you," soon appeared. PEIPER SS was painted on the road leading into town. Peiper received threatening phone calls and sent his wife and two children away to Switzerland but refused to budge himself. "Even if I was personally guilty, I paid the price with ten years in prison," he said.

Someone evidently did not agree.

Although several Molotov cocktails had been thrown through the windows of his house, French police speculate that Peiper's last moments began with gunfire: his hunting rifle along with three empty cartridges were found on his terrace. With positive identification of the charred body difficult, some townspeople began wondering whether Peiper might have in fact staged the shooting and fire to cover his own getaway. Mayor Rigoulot, for his part, let it be known that, even before the blaze, he had decided not to renew the German's residence permit next year.