>>> The Polish version was translated by Mateusz Trzeciak. 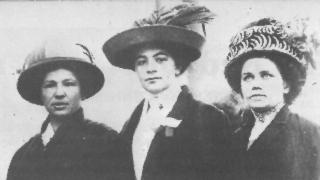 New Year's Day, 1912, ushered in one of the most historic struggles in the history of the American working-class. On that cold January 1st, the textile workers of Lawrence, Massachusetts, began a nine-week strike which shook the very foundation of the Bay State and had national repercussions.

In its last session, the Massachusetts State Legislature, after tremendous pressure from the workers, had finally passed a law limiting the working hours of children under the age of 18 to 54 hours a week. Needless to say, the huge textile corporations had viciously opposed the law.

As an act of retaliation, the employers cut the working hours of all employees to 54 hours, with a commensurate cut in wages, of course. The workers in the Lawrence factories, some 35,000 of them, answered this with a complete walk-out.

The strike itself was unique on many counts, but principally because the workers realized that they had to ignore the existing craft-union set-up. The craft unions were composed only of skilled, English-speaking workers, which excluded most of the workers. Instead, under the leadership of the International [sic] Workers of the World (IWW), a blow was struck on behalf of industrial unionism with the uniting of all textile workers in the strike.

In the course of the strike, the workers presented the bosses with the following demands:

The song... was inspired by one of the demonstrations which took place during the course of the strike. During a parade through Lawrence, a group of women workers carried banners proclaiming "Bread and Roses". This poetic presentation of the demands of women workers for equal pay for equal work together with special consideration as women echoed throughout the country.

James Oppenheim, many of whose poems reflect a working-class content and sympathy, picked up the phrase and made it into a poem. Martha Coleman set the poem to music, and the song has become a part of the singing tradition of the American working-class.

The song is more than an interesting piece of historic literature and is presented here... as a song for today, for the complete emancipation of women, who still demand "Give Us Bread -- And Give Us Roses!"
As we come marching, marching in the beauty of the day,
A million darkened kitchens, a thousand mill lofts gray,
Are touched with all the radiance that a sudden sun discloses,
For the people hear us singing: "Bread and roses! Bread and roses!"

As we come marching, marching, we battle too for men,
For they are women's children, and we mother them again.
Our lives shall not be sweated from birth until life closes;
Hearts starve as well as bodies; give us bread, but give us roses!

As we come marching, marching, unnumbered women dead
Go crying through our singing their ancient cry for bread.
Small art and love and beauty their drudging spirits knew.
Yes, it is bread we fight for -- but we fight for roses, too! 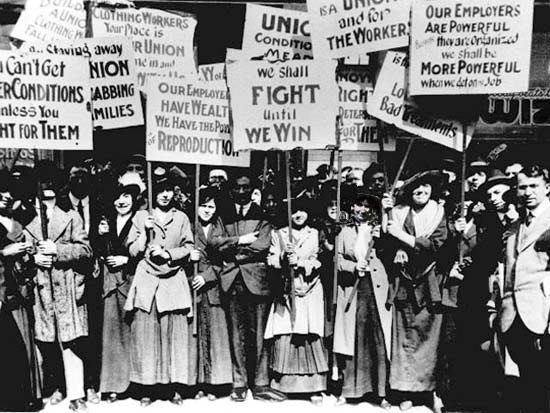 compare to original
compare to other versions
Language: Polish
The Polish version was translated by Mateusz Trzeciak.

Rose Schneiderman and Helen Todd are both (separately) credited with coining the slogan “Bread and Roses.” Both were suffragists: Todd a labor activist and Schneiderman a labor union leader. The slogan inspired James Oppenheim’s poem “Bread and Roses,” published in December 1911 in The American Magazine. The Lawrence, MA textile strike began in January 1912 and was also known as the “Bread and Roses Strike.”

English lyrics revised by Brivele for May Day 2018.