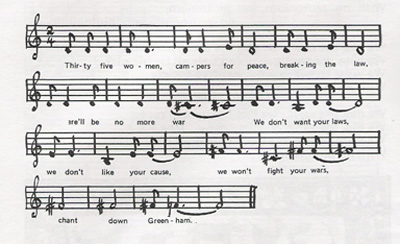 Author and composer: Alanna O'Kelly
In the late eighties, I heard, as a student, Alanna O'Kelly describe making Chant Down Greenham, an audio work for Sound Moves...

Also typewritten and published in the Anti-nuclear songbook and in the Frauenwiderstanscamp Hansrück songbook.
35 women, campers for peace
Breaking the law
So there'll be no more War.

We don't want your cruise,
We have life to lose
There's still time to choose,
Chant down Greenham.
So there'll be no more War.

35 thousand Women for peace,
Embracing the base
So there'll be no more War.