The Clash - Rock The Casbah 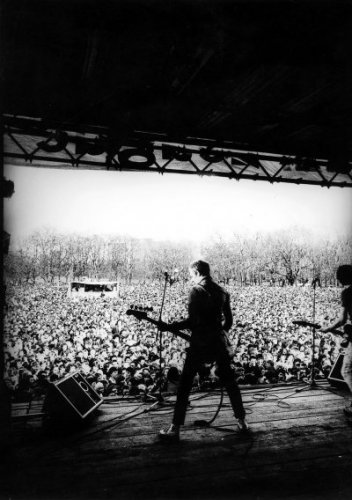 One theory is that the song was inspired by the banning of rock music in Iran under Ayatollah Khomeini. The song gives a fabulist account of the ban being defied by the population, who proceed to "rock the casbah". The King orders jet fighters to bomb any people in violation of the ban. The pilots ignore the orders, and instead play rock music on their cockpit radios.

The song does not mention Iran or any other Islamic nation by name. The lyrics include a mixture of Arabic, Hebrew, Hindi, and North African terms such as sharif, bedouin, sheikh, kosher, raga, muezzin, and casbah.

According to the album notes on the box set The Clash on Broadway, "Rock the Casbah" originated when the band's manager Bernie Rhodes, after hearing them record an inordinately long track for the album, asked them facetiously "does everything have to be as long as this raga?" (referring to the Indian musical style known for its length and complexity). Joe Strummer later wrote the opening lines to the song: "The King told the boogie-men 'you have to let that raga drop'". The rest of the lyrics soon followed.

The song is one of the few in which drummer Topper Headon played a substantial role in the writing of the music beyond the percussion tracks. The instrumental opening was a tune he had written on the piano some time earlier, and had toyed with during rehearsals before being incorporated into the song. In the 2000 documentary Westway to the World Headon said he played drums, bass, and piano on the record for the song. Headon claims that, while he thought he was merely playing the song for the band, his performances were, unbeknownst to him, recorded.[citation needed] All that was left to record was the guitar parts and the vocals.

en.wikipedia
Now the king told the boogie man
You have to let that raga drop
The oil down the desertway
Has been shakin' to the top
The sheik he drove his Cadillac
He went a cruisin' down the ville
The muezzin was a standing
On the radiator grille

Nowover at the temple - oh!
They really pack 'em in
They in-crowd says it's cool
To dig this chanting thing
But as the chanting direction
And the temple band took five
The crowd took a wiff
Of that crazy casbah jive

The shareef don't like it
Rockin' the casbah rock the casbah

He thinks it's not kosher
Fundamentally he can't take it
You know he really hates it.