>>> Itzhak Rabin was assassinated by an Israeli because of his attempt...

>>> "I personally hope for peace and would like embrace Arabs and... 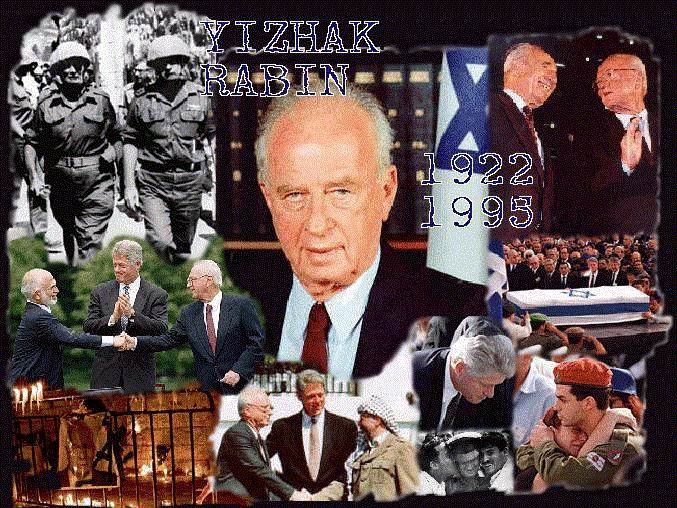 Itzhak Rabin was assassinated by an Israeli because of his attempt to make peace with the Palestinian Arabs. His ability to take a chance on trying to make peace was occasioned by him previously, as a General, acting in manner pretty close to becoming a war criminal. This may sound as a contradiction in terms, but it is not.

Noa, the writer of הסתיו בלעדיו (Autumn without him) was motivated by the sense of pain and loss after Rabin's assassination. Night seemed to have fallen over the hopes for peace.

Comments accuse Noa of being a hypocrite for supporting Isreal attack on Gazza. It seems a contradiction until taken in the proper context.

Hamas, the "democratically elected" rulers of Gazza are comitted to a genocidal agenda not only against Israel but against all Jews. Take the trouble to read the "Hamas Covenant" or charter, in particular, Article Seven. (English transalation on
this page ).

Hamas continued attacks on Israeli civilians are part and parcel of that agenda. For them,it is an Islamic article of faith they are not prepared to give up.

Most "fundamentalist" Muslims also consider it an article of faith as it is grounded in the Quran and Hadith.

That genocide was attempted by Mohammed and his cohorts and largely succeeded 1400 years ago, in the "Arabian Peninsula"

The demand for "liberating occupied territories" must be taken in it's Islamic context as Hamas is an offshoot of the Muslim Brotherhood, established in 1928 in Ismayliia, Egypt by Hasa Al Bana. This was 20 years before Israel became a state. There were no occupied territories as most Europeans understand them. It might interest the Italians that the Muslim Btotherhood is still committed to liberate the "occupied territories" with which Hasan Al Bana was pre-occupied. They include Sicily, Southern Italy and all the Italian coast, among others.

Unlike the Hamas and Militant Muslims genocidal agenda against all Jews, most Jews, extreme right wingers included do not harbor similar designs against Gazzan, "Palestinians", Arabs or Muslims. After losing six million Jews recently enough to the German led genocidal agenda, supported by two division of Muslim volunteers (Palestinians and Albanians included), do not expect most Jews to suffers such attempts lightly.

I personally hope for peace and would like embrace Arabs and Palestinians as my brothers, but if they choose to shoot at me, my wife, my children or grandchildren, and they, at the same time choose to abuse my humanity by sheltering behind their children, I shall not hesitate to shoot back even through their children if necessary.

To give peace a chance, Hamas and the Palestinians must renounce their Genocidal and Jihaddi Agenda. They find it diffcult to do so because they believe Mohammed and Allah mandates it. A cease fire for a few month to be broken as they think they are stronger or able to hoodwink gullible European denialist is not going to work. If they feel they cannot settle for peace, let them find some brave religious leaders able and willing to proclaim a binding cease fire for the next five thousand years, you will suddenly that peace is possible and "territories" as some land here and there is not the real issue.

"I personally hope for peace and would like embrace Arabs and Palestinians as my brothers, but if they choose to shoot at me, my wife, my children or grandchildren, and they, at the same time choose to abuse my humanity by sheltering behind their children, I shall not hesitate to shoot back even through their children if necessary."

This site is not "denialist", in any manner whatsoever. Just and also for this reason, as we know and respect the tragedy of the Jewish people through dozens of songs focused on this tragedy (most of which written by prisoners who died in the extermination camps), we cannot accept your bullshit propaganda. This is a serious website of counterinformation through songs and music. If you want to make propaganda, you have thousands of newspapers, tv's, radios other websites, official and unofficial media that are eager to spread such information. This is not our case.

It's the same old story. Just like Noa, you "love" Palestinians. They are always your "brothers", of course. You have your Grossmans, your folksingers, everything -including your Tsahal. You have everything, but you never reflect why you are losing the sympathy of the world. And you have a quite strange way of showing your love & brotherhood, indeed. We cannot see love and brotherhood through the use of white phosphor bombs. We cannot see love and brotherhood in such t-shirts: 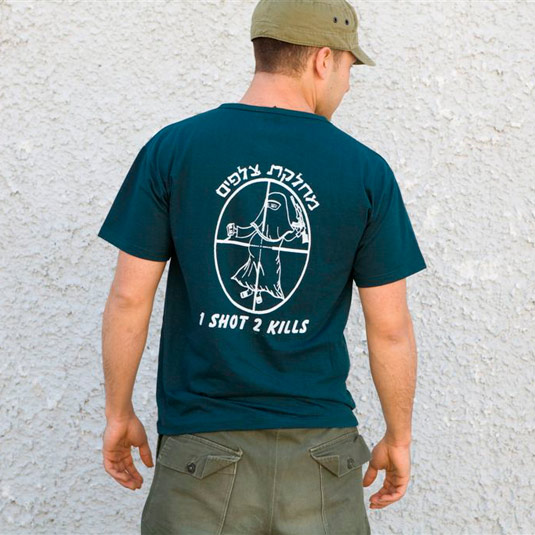 We cannot see love and brotherhood in the continuous, systematic use of hypocrisy, as you know that hypocrisy is based on military strength. You say that they "abuse your humanity by sheltering behind their children"; you abuse our humanity by sheltering behind the Holocaust, to deliberately kill children and women who cannot go elsewhere. There is no "shelter" for them, when you decide to close them in a city without any possibility of escape. There is no shelter for anyone when you bomb schools, hospitals and even shelters.

If you really want to show true love and brotherhood, you should fight first against your own hypocrisy. Anyone who does not agree with you becomes automatically an "Antisemite". Well, we are not like this. We are not against Israel: we stand for true freedom and peace. Freedom and peace are no propaganda. The so-called "left-wing" Israelis, like Noa and others, who fill their mouths with "peace" and "brotherhood" but support a slaughter by using the same lies of your government should be called by their proper name: whited sepulchers.