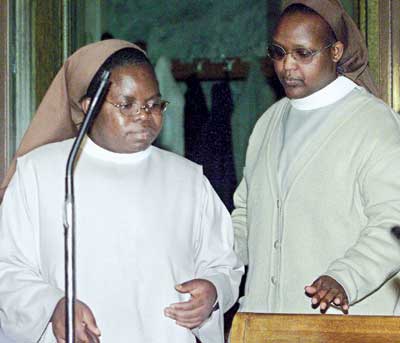 Consolata Mukangango, Sister Gertrude and Julienne Mukabutera, Sister Kisito. Sisters of Death.
This song is for the victims, but especially the few survivors of the massacre at the Convent at Butare in 1994. More than 5,000 people had fled to the supposed sanctuary of the Catholic Church -- with the expectation that God and His servants would protect them from the killers.

Sadly, God did not intervene when two of His nuns decided to take part in one of the most horrific mass killings in all of history.

These murders were not accomplished by means of explosives - or flying jet airliners into large office towers - or by military assault - or machine guns - or poison gas. These murders, of more than 5,000 people killed in cold blood, were accomplished with machettes. Chopping and chopping and chopping - beyond the point of exhaustion - in the "Holy" House of God -
with the "Brides of Christ" providing succor, nourishment, and support to the members of the slaughtering machine.

In July of 1994 two Benedictine Nuns, Consolata Mukangango and Julienne Mukabutera, were removed from Rwanda by the Catholic Church and placed in a Convent in the town of Maredret, Belgium. However, since that time a new law has been passed in Belgium which allows individuals, including non-Belgians, to be tried in Belgium for war crimes committed elsewhere.

They are now standing trial for the murder of 5,000 people - under the Geneva Convention. If convicted they will likely serve life in prison.

It is not insignificant that the Vatican acted in this and other notable cases, like that of the infamous Bishop Wenceslas, to extract its people -- who were known to be nstumental in the genocide -- and remove them to safety in other countries.

Requiem For Butare is intended to underline the tragedy which results from clinging to - and seeking out - a supernatural solution - in the face of the unrelenting evil of mankind. I will never be convinced that all those who were murdered lacked sufficient faith or were so filled with sin that they were not worthy of saving.

As indicated in the final verse of the song, however, it is vital that we remember that there are indeed good, kind, brave people on this planet. We must never lose sight of the good in the world. We must look after the children.

May we never again turn our backs when the cries for help fill the heavens.
First among the tell-tale signs of madness
Is an unreasoning compulsion to believe
In miracles and faith
That love will find a way
That in the end the truth will set you free

So each night while the stars hang in the blackness
A billion frightened voices beg for peace
Kneeling 'mongst the graves
Of Paupers, Kings and Slaves
The definition of eternity

Yet if we look, there's a glimmer midst the ashes
A whisper of the way that things might be
The laughter of a child
A young bride's happy smile
The golden glow of sunrise o'er the sea