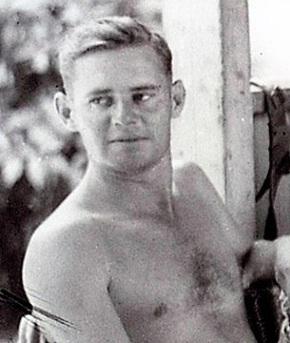 Conway, born 11 December 1928, in Brisbane, Queensland, Australia, was a Warrant Officer Class 2, with the Australian Army Training Team Vietnam. He was killed in action (K.I.A.), in the Battle of Nam Dong, South Vietnam on 6 July 1964, aged 35 years, buried at Kranji War Cemetery in Singapore. His remains were repatriated to Australia 2nd June 2016.

Vietnam War Song Project
Kevin Conway was a soldier who left his native shore
He travelled off to Vietnam where there waged a savage war
And in that rugged country far from his land of birth
The blood of Kevin Conway soaked into the soft brown earth
But when a people hunger to be free
No power on earth can say their destiny.
The peasants fought for freedom throughout the countryside
And a hundred billion dollars couldn't buy a people's pride
So men from foreign countries use the Pound to kill and maim
And call themselves advisors, but they're killers just the same.

And what of Kevin Conway, as he drew his final breath?
Did he curse the men who sent him to meet his tragic death
Were his masters filled with sorrow when they learned about his fate?
Is there such a thing as sorrow in who thrive on hate?
A man should be a brother to all men
For we shall never pass this way again
Now in a mine disaster, a bushfire or a flood
Me risk their lives for others
It's in the human blood
Men give their lives for others, it happens every day
But he who dies for tyranny has thrown his life away