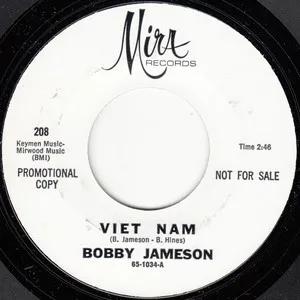 Jon Savage on song: Bobby Jameson rages against the Vietnam war
This garage-punk classic is a vehement statement against a war that, by early 1966, was spiralling out of control 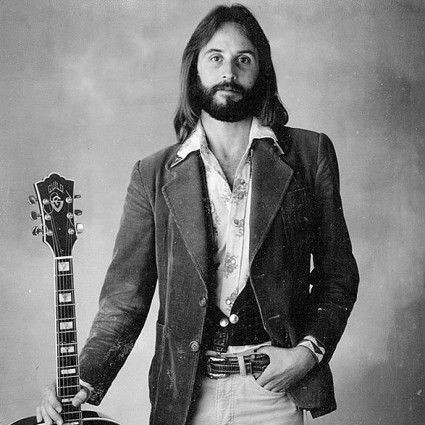 A fanfare of slow, church organ chords – straight out of a horror film – resolves into a brutal Bo Diddley beat. A few blasts of harmonica carry the riff, and then a full-throated voice begins to testify. It's a stitch-up he's complaining about, and we're not talking pop-art clothes: "Senators the congress and the politician man, well they all got me in the mess I'm in/ Said I got a call from Uncle Sam, said 'send that boy to Vietnam.'"

This is a horror movie, only for real, and the singer is really pissed off because he knows what he's facing: "President Johnson gonna call him up/ Tell him that my life is getting rough/ The district attorney and the lawyer man, well they can't help me now, no one can." The song is called Vietnam and it's such a ferocious, funky blues that you could be forgiven for thinking that the singer was black: but he wasn't.

When Vietnam was recorded, in late 1965 or early 1966, Bobby Jameson was a young performer trying to break in to the LA music industry. He had connections: in 1964 he recorded a couple of early Rolling Stones' songs, All I Want Is My Baby and Each and Every Day of the Year. In his autobiography, Keith Richards calls him "PJ Proby's valet".

In 1965 Jameson recorded an album called Songs of Protest and Anti-Protest. This was a bizarre episode typical of the period: a singer called Chris Ducey had recorded an album that was cancelled at the last minute. Producer Marshall Leib – a former member of the Teddy Bears, Phil Spector's first group – drafted in Jameson to record songs that matched the titles already printed on the sleeve under the name Chris Lucey.

After recording a couple of 45s with Frank Zappa, Jameson found himself in a studio working with the Leaves – a local band who had released a couple of killer singles, Too Many People and their cover of Hey Joe. What they concocted was an all-time garage-punk classic – a vehement statement against a war that, by early 1966, was already spiralling out of control.

Unlike today's conflicts Vietnam was largely a conscription war. The draft really began in earnest during 1966: that year the number of American servicemen in Vietnam more than doubled, from around 125,000 to near 400,000. And it was selective: deferments were granted to college students in particular, leaving the poor and working-class much more liable to serve.

From late 1965 on, Vietnam divided America: in one corner, gung-ho patriots; in the other, the young men who were actually eligible to fight. These tensions were played out in the pop charts, with huge protest and anti-protest hits such as Barry McGuire's Eve of Destruction and Sgt Barry Sadler's Ballad of the Green Berets (both US No 1s).

It was a hugely emotive issue, and you can hear the gamut of responses on the extraordinary new Bear Family box set, Next Stop Is Vietnam. The war and the divide that it created gave late-60s American youth culture a huge kick that explains some of the more outlandish manifestations, such as Woodstock – where Country Joe McDonald sang I-Feel-Like-I'm-Fixin'-to-Die Rag.

In the pantheon of protest, Bobby Jameson's Vietnam is not well-known but it is both early and extremely effective – with its deep level bass rumble and totally committed vocal. It comes off as a blast of – if not exactly blue-collar, then at least suburban – rage to suit the garage bands' customary origins. (They're called garage bands because they had a garage to rehearse in, all right?).

The draft devastated a micro-generation of musicians. Histories of garage bands usually recount the disappearance of one or two members off to south-east Asia. The most notorious story is that of the Misunderstood, a top-notch psych group whose singer Rick Brown was drafted and went AWOL in the far east, returning to the US in 1979 to receive a pardon from President Carter's administration.

Jameson's howl of rage was released on a 45 and went nowhere. However, the session was filmed by director Robert Cohen for Mondo Hollywood. Cohen wrote that Jameson "became part of MONDO by fulfilling one or more of the three required criteria: 1. Be typically Hollywood (ie trying to live-out a dream self-image in the LA area) 2. Or be very WEIRD, or 3. Be both 1. and 2."

Vietnam is the highlight of a patchy film in which genuine culture participators such as Vito Paulekas (who also recorded with Zappa) jostle against irritating attention seekers. It's fascinating to see Jameson working with an integrated band – a rarity in Los Angeles at that time – and, as he loses himself in the song's abrasive noise, you can feel the madness of the times.

theguardian.com
Senate and the congress
And the politician man
Well they all got me
In the mess i'm in