Who Do They Think They Are?

Cynthia Kay Cockburn, sociologist and peace activist, born 24 July 1934; died last year, 12 September 2019.
In 1993, she was key to establishing WiB in London and was instrumental in sustaining it over decades as an organiser and participant in weekly vigils at the statue of Edith Cavell in Trafalgar Square. Cynthia joined the street choir Raised Voices in 1994. The political choir Raised Voices was another important part of Cynthia’s local political engagement. As well as singing in the choir, she wrote the lyrics to several of the songs that have made up its repertoire.

Cynthia Cockburn, who died a year ago, on 12th September 2019 aged 85, was an extraordinary person. She had a capacity for living in accordance with her principles – of justice, equality, peace, and care for others – which makes her quite simply the most moral person I have known. I didn’t know her well, but our lives crossed in many ways. We were both active in the women’s movement of the 1970s, we both attempted to inject an awareness of gender into academia (not the most receptive of places), and we shared a dual geographical location in North London’s Kentish Town, and a small village in Rutland, where some of Cynthia’s family still live. In the last few years we wrote several pieces on masculinity together. We would meet in cafés to bewail the difficulty of moving discussions about masculinity onto a serious policy agenda. Once we met Jon Snow in an Italian café opposite the Channel 4 building to talk about how to turn masculinity as a policy issue into headline news. Cynthia was having technical difficulties with her hearing aid at the time, and these seemed to symbolise the chaos of the media world in the face of such ‘unnewsworthy’ but absolutely fundamental questions (Jon himself was a good listener).

Cynthia was born in Leicestershire to a family which regarded marriage rather than higher education as women’s destiny. She never went to university, but collected a string of honorary degrees and academic appointments which enabled her to have a distinguished research career. The first book I read of hers was Brothers: Male Dominance and Technological Change (published by Pluto in 1983). Most social studies of labour have been about men, but in that very particular sense of completely ignoring men’s enmeshment in a culture of masculinity which always carries the default position of control and dominance. Brothers studied men in the printing industry as men, showing how these features of masculinity asserted themselves in the face of unsettling technical change. Cynthia’s methodology in this research was typical of her approach to all the questions she tackled: firm location of the question in the sociology of gender; intensive case-studies and qualitative interviewing; a democratic approach to the sharing of data and interpretation. In this she was at the forefront of feminist scholarship, acting as a role model to researchers in many countries.
She left a body of work which is notable for crossing conventional disciplinary boundaries – a benefit, perhaps, of not having been squashed into a narrow disciplinary place as a result of doing a university degree. The British Library has 63 ‘hits’ for the name ‘Cynthia Cockburn’ (how she would have hated that metaphor), including some 15 books, which have been translated into at least 12 different languages. Her research has informed decision-makers and politicians across the globe, and her books are used as textbooks in many universities. The early interest in technology, gender and organizations became increasingly a concern with identity, nationality, diversity, and, of course, with militarism, war and violence. She was, personally, the most gentle of people, and she wanted a world where violence was no longer a response to conflict and difference. Her books The Space Between Us (1999), The Line (2004), From Where we Stand (2007), and Antimilitarism (2012) are powerful explorations of women, gender and conflict across the world – in Northern Ireland, Bosnia-Herzegovina, Israel/Palestine, Cyprus, South Korea, Japan, Spain and elsewhere. Her most recent book, Looking to London (2017) celebrated the city she loved. It tells the stories of women refugees in London’s Kurdish, Somali, Tamil, Sudanese and Syrian communities. 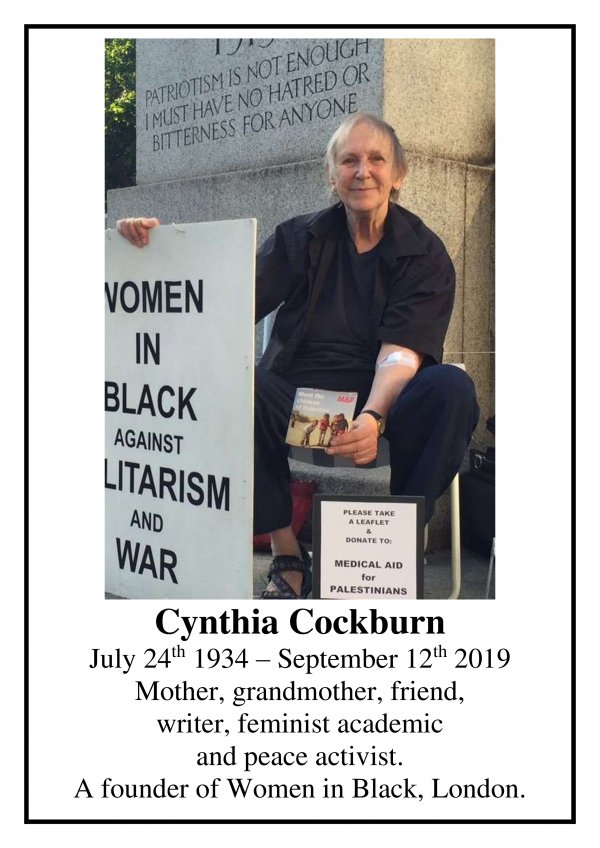 When she died, Cynthia was working on a book about the history of Women in Black, an international network of women she founded in 1988 to campaign against militarism, violence and war. Women in Black mounts street actions in five continents, and Cynthia herself was a regular attendee at its weekly meetings in London by the Edith Cavell statue in Trafalgar Square. For Cynthia the intellectual understanding and the political engagement could never – should never – be separated. This was a recurrent theme in the event that was held jointly by the journal Feminist Review and the SOAS Centre for Gender Studies in October 2017 to celebrate her work. Cynthia inspired people, by her sociological wisdom and by her political passion, by the lack of division she saw between them, and by her enormous talent for communication and friendship. I remember thinking, as I listened to these tributes, how good it was that such an event was taking place while she was still alive (normally they are depressing post-mortem occasions); Cynthia was hopefully left in no doubt as to how much her work was appreciated and what a difference it has made.
She was also what is conventionally described as a ‘well rounded’ human being. She was a strong presence in the lives of her two daughters and three grand-daughters, who must miss her in so very many ways. She loved and knew a great deal about the natural world, including, it is said, much about trees, the geography of the night sky, and the songs of over 100 birds. She was an excellent amateur photographer, holding exhibitions of her work in a local café. House maintenance was another enviable skill – she could manage such tricky carpentry as a pigeon loft and shutters for irregularly shaped windows. She sang in a choir called Raised Voices, writing many of its lyrics: the song Who Do They Think They Are? about the invasion of Iraq in 2003 is particularly memorable. She last sang with the choir on August 6th this year, the commemoration of Hiroshima, a month before she took the brave decision to end her life with Dignitas. Having undergone heavy doses of treatment for bowel cancer, she knew she wouldn’t be cured; living a poor quality life without the work and social contacts she loved wasn’t something she wanted to do.
It is hard to think of a world without Cynthia in it. We relied on her to keep our vision straight, to remind us of the important goals, to show us the true meaning of respect for individual difference, and to be a living demonstration of sisterhood. Many people use that word casually, without considering its meaning. Cynthia knew what it meant.

Ann Oakley
is a distinguished British sociologist, feminist, and writer.
She is Professor and Founder-Director of the Social
Science Research Unit at the UCL Institute of
Education, and in 2005 partially retired from
full-time academic work to concentrate
on her writing.
Who do they think they are...
These men in suits who posture and proclaim
Who speak of justice while they kill and maim
And have the gall to say they do it in my name
Who do they think they are?

Lost in their fantasy
So far removed from my reality
I long, I long to call them back
To sweet humanity.