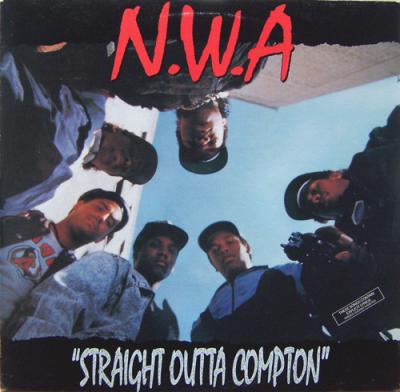 In the wake of the death of George Floyd who died on Monday, May 25th due to police brutality, Anonymous has joined up with protests and hacked Chicago police scanners to play N.W.A.’s ‘Fuck Tha Police’.

This past week has seen the Black Lives Matter movement escalate to an entirely new level. Following the death of a 46-year-old man named George Floyd, who died due to asphyxiation from being held to the ground by a police officer placing his knee in the crook of Floyd’s neck, the USA, and many places around the world, have seen pure outrage.

Beyond peaceful protests, there has been rioting, looting, and many people calling for a systematic change, including many musicians using their social platforms to promote justice.

On Saturday, May 30th, Anonymous took to Twitter to announce they were playing a part in solidarity with the protestors who are actively fighting against racism and corruption that is running rampant in the USA. 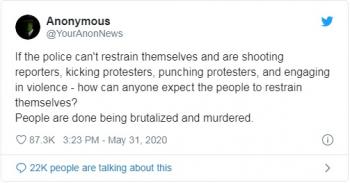 Shortly after this tweet became live, ‘Fuck Tha Police’ by N.W.A. began playing on the Chicago police scanners, causing disruption to the police who use them as communicating devices.

Additionally, on Sunday evening, the Chicago police had their police scanners hacked one again by someone playing Tay Zonday’s ‘Chocolate Rain’. Although it’s unknown if this disruption was put on by Anonymous as well, the intrusion shows that people are not just wanting change, but they are actively willing to fight for it and have their voices heard.

Check out ‘Fuck Tha Police’ by N.W.A. played across police scanners thanks to Anonymous.


From Tone Deaf
[Intro: The D.O.C., Dr. Dre, and Ice Cube]
Right about now, N.W.A court is in full effect
Judge Dre presiding
In the case of N.W.A versus the Police Department
Prosecuting attorneys are MC Ren, Ice Cube
And Eazy-motherfucking-E
Order, order, order!
Ice Cube, take the motherfucking stand
Do you swear to tell the truth, the whole truth
And nothing but the truth so help your black ass?
You goddamn right
Well, won't you tell everybody what the fuck you gotta say?

[Verse 1: Ice Cube]
Fuck the police comin' straight from the underground
A young nigga got it bad 'cause I'm brown
And not the other color, so police think
They have the authority to kill a minority
Fuck that shit, 'cause I ain't the one
For a punk motherfucker with a badge and a gun
To be beating on and thrown in jail
We can go toe-to-toe in the middle of a cell
Fuckin' with me 'cause I'm a teenager
With a little bit of gold and a pager
Searchin' my car, lookin' for the product
Thinkin' every nigga is sellin' narcotics
You'd rather see me in the pen
Than me and Lorenzo rollin' in a Benz-o
Beat a police out of shape
And when I'm finished, bring the yellow tape
To tape off the scene of the slaughter
Still getting swole off bread and water
I don't know if they fags or what
Search a nigga down and grabbing his nuts
And on the other hand, without a gun, they can't get none
But don't let it be a black and a white one
'Cause they'll slam ya down to the street top
Black police showing out for the white cop
Ice Cube will swarm
On any motherfucker in a blue uniform
Just 'cause I'm from the CPT
Punk police are afraid of me, huh
A young nigga on the warpath
And when I'm finished, it's gonna be a bloodbath
Of cops dying in L.A.
Yo, Dre, I got something to say

[Skit 1: Cop, MC Ren, & Dr. Dre]
Pull your goddamn ass over right now!
Aw shit, now what the fuck you pullin' me over for?
'Cause I feel like it!
Just sit your ass on the curb and shut the fuck up!
Man, fuck this shit
Alright, smart-ass, I'm taking your black ass to jail!
MC Ren, will you please give your testimony
To the jury about this fucked up incident?

[Verse 2: MC Ren]
Fuck the police and Ren said it with authority
Because the niggas on the street is a majority
A gang is with whoever I'm steppin'
And the motherfuckin' weapon is kept in
A stash spot for the so-called law
Wishing Ren was a nigga that they never saw
Lights start flashing behind me
But they're scared of a nigga, so they mace me to blind me
But that shit don't work, I just laugh
Because it gives them a hint not to step in my path
For police, I'm saying, "Fuck you, punk!"
Reading my rights and shit, it's all junk
Pulling out a silly club, so you stand
With a fake-ass badge and a gun in your hand
But take off the gun so you can see what's up
And we'll go at it, punk, and I'ma fuck you up
Make you think I'ma kick your ass
But drop your gat, and Ren's gonna blast
I'm sneaky as fuck when it comes to crime
But I'ma smoke 'em now and not next time
Smoke any motherfucker that sweats me
Or any asshole that threatens me
I'm a sniper with a hell of a scope
Takin' out a cop or two, they can't cope with me
The motherfuckin' villain that's mad
With potential to get bad as fuck
So I'ma turn it around
Put in my clip, yo, and this is the sound (*Gunshots*)
Yeah, somethin' like that
But it all depends on the size of the gat
Takin' out a police would make my day
But a nigga like Ren don't give a fuck to say

[Skit 2: Cop, Eazy-E, and Dr. Dre]
*Knocking*
Yeah, man, what you need?
Police, open now (Aww, shit)
We have a warrant for Eazy-E's arrest (*Battering ram*)
Get down and put your hands right where I can see 'em! (Move, motherfucker, move now!)
What the fuck did I do, man? What did I do?
Just shut the fuck up and get your motherfucking ass on the floor! (You heard the man, shut the fuck up!)
But I didn't do shit
Man, just shut the fuck up!
Eazy-E, won't you step up to the stand
And tell the jury how you feel about this bullshit?

[Verse 3: Eazy-E & MC Ren]
I'm tired of the motherfuckin' jackin'
Sweating my gang, while I'm chillin' in the shack, and
Shining the light in my face, and for what?
Maybe it's because I kick so much butt
I kick ass, or maybe 'cause I blast
On a stupid ass nigga when I'm playing with the trigger
Of an Uzi or an AK
'Cause the police always got somethin' stupid to say
They put out my picture with silence
'Cause my identity by itself causes violence
The E with the criminal behavior
Yeah, I'm a gangsta, but still, I got flavor
Without a gun and a badge, what do you got?
A sucker in a uniform waiting to get shot
By me or another nigga
And with a gat, it don't matter if he's smaller or bigger
(Size don't mean shit, he's from the old school, fool)
And as you all know, E's here to rule
Whenever I'm rollin', keep lookin' in the mirror
And ears on cue, yo, so I can hear a
Dumb motherfucker with a gun
And if I'm rollin' off the eight, he'll be the one
That I take out, and then get away
While I'm driving off laughing, this is what I'll say 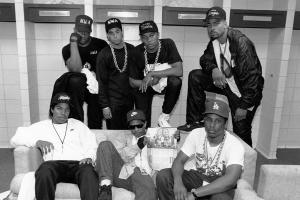