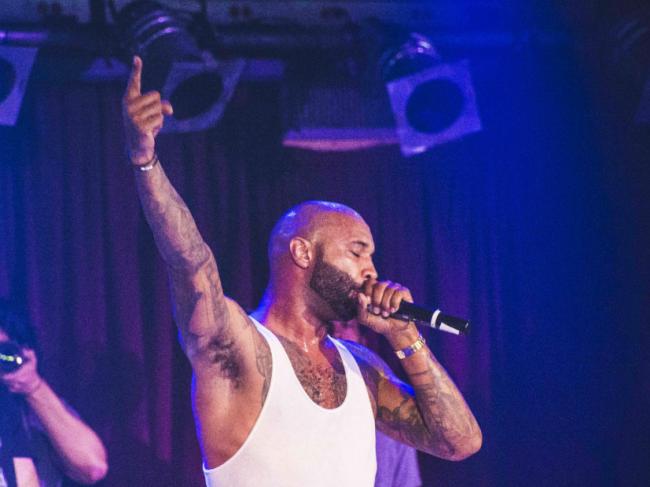 [Jesse Williams]
Now, what we've been doing is looking at the data and we know that police somehow manage to deescalate, disarm and not kill white people everyday. So what's going to happen is we are going to have equal rights and justice in our own country or we will restructure their function and ours

[Verse: Joe Budden]
Let's take a moment to stand and observe the Hell we live in
No matter how high the fire it never melts the system
Some can help but didn't, we fill up the jails and prisons
You don't believe that's a business, only yourself you're kiddin'
But now they killin' our people, it's all on television
Them cops went home to their people, turn on the television
I tell my son, careful what you learn on television
He 15, he don't know what I mean
Don't know about yet, doubt and suspect, out sets of controlled outlets
From those who don't wanna let us out yet
Land of the free, the home of the brave (nah)
Can't let us be, we've grown from slaves
It's there if you wanna read, I mean it's all on the page
Say it's police, I just know when it's race
Now it's just thrown in our face....
Maybe I'm lost, signs are vital to me
Sandra Bland didn't come off as suicidal to me
Y'all play around, thinkin' we on safe ground
They killed Tamir Rice and his rights, right on that playground
Eric was selling cigarettes, "I can't breathe," it was said
The bigger threat he was a nigga, I bet, but listen
Last year I went to church with my Mother Fay
We sat behind Ms. Garner, and it was Mother's Day
She sat strong, inside I cried for her
My eyes tucking the water as I was hugging his daughter...
Philando Castillo told him he had a weapons permit
Was murdered moments after without a complexion permit
That's bloodshed with his daughter in the car
I'm only upset for our sons and daughters tomorrow
Question, how many cities we gotta march through?
Signs we gotta hold up, or are they tryna provoke us?
Cause when them 9s load up, and land mines blow up
And the crime don't slow up, they'll chime in and say they told us
Or is it only a crime when done by poor us
Food for thought, my mind don't run off of cold cuts
Raw and evident, Alton was offed, heaven sent
Recorded the negligence, they just ignore the evidence
And make it seem as if we in y'all way
Maybe our government is governed by the NRA
That would make a diseased Capitol, in need of capital
They even legalized weed for the Capitol
But be black, sell in the street, they get mad at you
Casually clap at you, it's Uncle Sam sayin' taxes due
Our epidemic systemic
Black Panther fist at Olympics they just condemn it, hold up
Said the Klan marched in Piedmont
Even worse, they were protected by police arms
In Baton Rouge its pictures of them in riot gear
It tells me they know it's plenty reason to riot there
Yet we just keep on praying all while we feeling it
Racism still alive, now they not concealing it
It's revamped, shackles are gone, now we get house slippers
And all us millionaires are the house niggers
Irony, the only ones naked are urban outfitters
White people seeing us murdered are even down with us
They sayin' let's make America great again
I'm curious, what time would you like to place us in?
Were we degraded then? Did they enslave us then?
Or is it ignorant of me to even say again?
If it's civil war, then what are we civil for?
It's this is freedom to y'all, you better get us some more

[Hook: Beyoncé]
Freedom! Freedom! I can't move
Freedom, cut me loose!
Freedom! Freedom! Where are you?
Cause I need freedom too!
I break chains all by myself
Won't let my freedom rot in hell
Hey! I'ma keep running
Cause a winner don't quit on themselves

[Outro: Jesse Williams]
And we're done watching and waiting while this invention called whiteness uses and abuses us, burying black people out of sight and out of mind while extracting our culture, our dollars, our entertainment like oil - black gold, ghettoizing and demeaning our creations then stealing them, gentrifying our genius and then trying us on like costumes before discarding our bodies like rinds of strange fruit