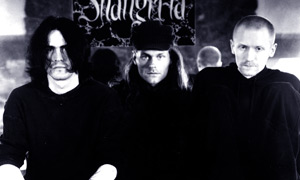 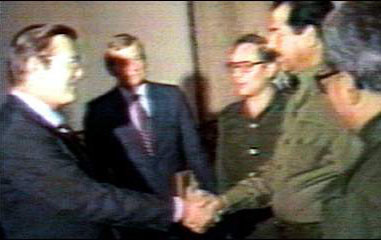 Welcome to the morning news. In its long and deadly war with Iraq, Iran has repeatedly sought international condemnation of Baghdad's alledged use of chemical weapons. The Iranians have ??? the opportunity to make their case. A city in eastern Iraq, recently occupied by Iranian forces, (?captured ??? by the siege?), according to Iran, the Iraqis bombed the city with chemical weapons. After the defeat the Iranians said the attack killed more than four thousand civilians. Welcome to the VX Gas Attack.

(1:41) Saddam ??? believe this. There are limits to our patience
(1:59) Never remember the hundreds of possible thousands of victims of one of the worst chemical warfare attacks since world war I
(2:11) We have the technology to produce chemical weapons. We will not remain idle forever.
We have the technology to produce chemical weapons. We will not remain idle forever.
(3:02) They can understand the governments message. In a shop in a working class district one day last week one man demonstrated the idea of a chemical warfare protector by putting a plastic shopping bag over his head.
(3:38) ??? husband and parents ??? believed dead ??? brought to a stange land ??? understand ??? sudden sound ??? discover (long portion i can't make out)
(4:09) We're analyzing water, soil, and human tissue samples to get clearer information about the gas attack. Meanwhile, doctors monitor bone marrow damage.
(4:40) Meanwhile back on the west bank, we are frightened, so frightened, revere the red, green, white, black colors of the flag tied to the mosque in the ??? we have cause to be enraptured turns irrational thunder ??? reacts to it very stifly his body is ??? anger ??? fracture ??? red fire ??? says someone came in a car with an uzi and killed his friend in a grave down the crossroads by the mosque. The friend of the dead man promises he will never forget.