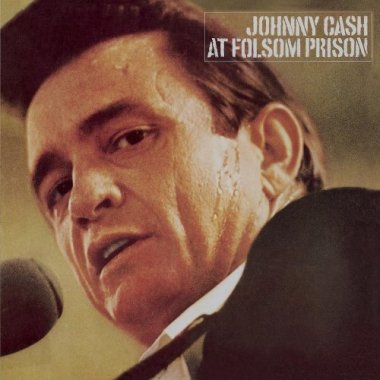 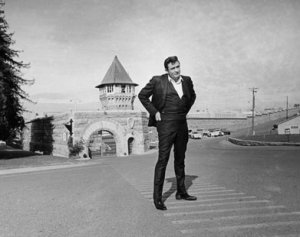 Folsom Prison Blues is an American country music song written by Johnny Cash in the early 1950s and originally recorded with his trio in 1956 for the Sun Records label. The song combines elements from two popular folk genres, the train song and the prison song, both of which Cash would continue to use for the rest of his career.

In the lyrics, the jailed protagonist listens to the whistle of the train outside his cell and recounts his deeds "I shot a man in Reno/just to watch him die," imagines the free people inside the train and dreams of what he would do if he were free. "I know I had it coming/I know I can't be free," sings the imprisoned man. "But those people keep a'moving/and that's what tortures me." The song does not clarify why the protagonist is serving time in California despite having committed murder in Nevada (unless he is serving time in Folsom for another offence, and is recalling the Reno murder as he reflects on a life of crime).

Cash was inspired to write this song after seeing the movie Inside the Walls of Folsom Prison (1951) while serving in West Germany in the United States Air Force. Cash recounted how he came up with the "Reno" line: "I sat with my pen in my hand, trying to think up the worst reason a person could have for killing another person, and that's what came to mind."

The song borrows heavily, both lyrically and melodically, from a Gordon Jenkins composition on his 1953 Seven Dreams concept album (the Jenkins song is often referred to as Crescent City Blues). Jenkins later reportedly filed an infringement lawsuit and received a settlement after Cash's 1968 live recording achieved widespread success.

Cash included the song in his repertoire for decades. The definitive live performance is considered to be the opening song of a concert recorded at Folsom Prison itself on January 13, 1968. This version was eventually released on the At Folsom Prison album the same year. That opening song is more up-tempo than the Sun studio recording, as befits a concert-opening number. However, the recording's most notable feature — the whoops from the audience at the "Reno" line — was actually added in post-production, according to Michael Streissguth. A special on the Walk the Line DVD indicates that the prisoners were careful not to cheer at any of Cash's comments about the prison itself, fearing reprisal from guards.

This song, coupled with Cash's known drug and alcohol abuse problems, helped give rise to the myth that Johnny Cash served prison time.
I hear that train a-commin',
It's rollin' around the bend
And I ain't seen the sunshine
Since I don't know when
I'm stuck in Folsom prison
And time keeps draggin' on,
But that train keeps a-rollin'
On down to San Antone.

When I was just a baby,
My mama told me, "Son,
Always be a good boy,
Don't ever play with guns"
But I shot a man in Reno,
Just to watch him die
When I hear that whistle blowin',
I hang my head and cry.

I bet there's rich folks eatin'
In a fancy dining car
They're probably drinking coffee
And smoking big cigars
But I know I had it coming,
I know I can't be free,
But those people keep a-movin'
And that's what tortures me

Well if that freed me from this prison
And that railroad train was mine,
I bet I'd move it on
A little farther down the line
Far from Folsom prison,
That's where I want to stay
And I'd let that lonesome whistle
Blow my blues away. 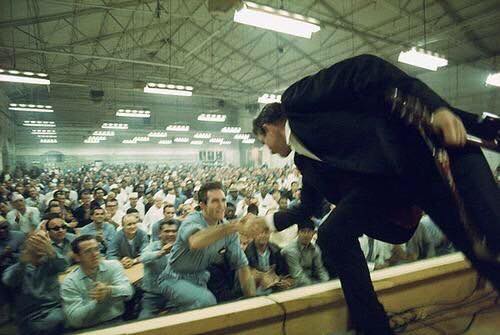 
I hear that train a-commin',
It's rollin' around the bend
And I ain't seen the sunshine
Since I don't know when
I'm stuck in Folsom prison
And time keeps draggin' on
But that train keeps a-rollin'
On down to San Antone. 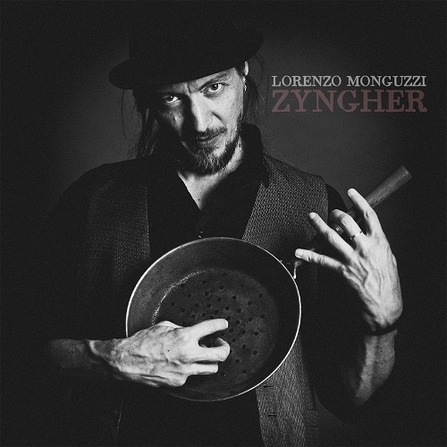