Peace In The End 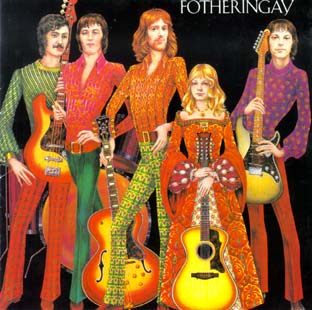 ‘Fotheringay’ was formed in 1970 by singer Sandy Denny (Ex-Strawbs ) upon her departure from ‘Fairport Convention’, together with her future husband, Australian songwriter Trevor Lucas (Ex-Eclection, ), Gerry Conway (Ex-Eclection) and two former members of ’Poet and the One Man band’ Jerry Donahue and Pat Donaldson. ‘Fotheringay’ played Folk-Rock similar to ‘Fairport Convention’, introducing Jazz-elements like ‘Pentangle‘.

The band drew it’s name from Fotheringay Castle, where Mary Queen Of Scots was imprisoned in England, a name, that Denny had already used for one of her finest compositions on the second ‘Fairport Convention’ release “What Did We Do On Our Holidays”(1969).

In 1970 the band recorded their lone self titled album with producer Joe Boyd. The record mixed Rock, Folk and Jazz-elements and sounded similar to , ‘Fairport Convention’ with a less rockier side,Trevor Lucas rhythm-guitar-work giving the record an overall lighter feeling. The record contains two traditionals, among them the outstanding “Banks Of The Nile”, a Gordon Lighfoot composition “The Way I Feel”, a Dylan cover “Too Much Of Nothing” and original songs by Denny, (among them “Nothing More” and “The Sea”), Lucas and Dave Cousins.

Although the album and the group was well received (“Fotheringay” reached the UK top twenty) the band broke up in 1971. Sandy Denny embarked on a solo carreer (some songs for a projected second ‘Fotheringay’ record surfaced on Denny’s first solo recod “The Northstar Grassman and The Ravens”), Donaldson and Conway began session work, while Lucas and Donahue rejoined ‘Fairport Convention’.

from this page
Come on Mary, Mary or you, John,
To which religion do you belong?
You and your lover, you and your friend,
Peace in the end.

What about me, me and my kind,
If were unknown, are we left behind?
We have our lovers, too, and our friend,
Hope in the end.

You may think our lives are forever.
I think you could be wrong.
But if we were together, together,
I know we could get on.

Go ask your neighbours to come and sing songs,
You know they’ve wanted to all along.
I’ve seen them smile for their friends,
All in the end.

You may think our lives are forever.
I think you could be wrong.
But if we were together, together
I know we could get on.

Come on Mary, Mary or you, John,
To which religion do you belong?
You are our lovers, you are our friends,
Peace in the end.