Beware of a movement that sings! 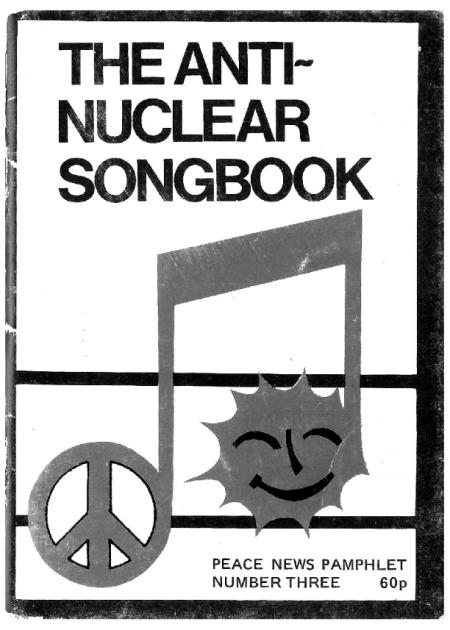 All popular social movements have used song to express their grievances, to make propaganda, to bring people closer together, and the anti-nuclear movement is no exception. Words and music are two ways people communicate, and In combination they can create a tremendous amount of energy and feeling, which sustain and strengthen our efforts for change.

This collection is largely made up of songs and carols to tunes that at least one of your circle of friends should know. They were written by activists involved in the struggle against nuclear energy and nuclear weapons over the last six or seven years. The two exceptions, coming from the early 60s, are H-Bombs Thunder, which deserves the grand title of the "anti-Bomb anthem", and the Worker's Bomb, which was dedicated to those many leftists who thought nuclear weapons were compatible with socialism. There seem to be less of them around today. Also included are five original pieces from the Fall-Out Marching Band, whose music has turned many a demonstration Into a celebration on the streets. We had far too many songs to publish them all at a reasonable price, so we've probably missed one or two of your favourites.

The songs deal with both nuclear weapons and nuclear power. The nuclear chain is a long series of horrors from the destruction of aboriginal lands by uranium mining right through to ballistic missiles, power stations and radioactive waste dumping. We must stop It all. Lastly, books are for reading, and songs are for singing: they need voices to bring them alive. At demonstrations and festivals, In a hard meeting, or in door-to-door carol singing—that's where these songs belong. Sing On!

Stands like a zombie, he's part of the machine
Feeding all the warheads, he thinks his power is clean
Plutonium connection is something he's not seen
That deaf dumb and blind kid, sure don't knoww here he's been

Cult of the expert he knows what's best for us
To let the public have their say is just ridiculous
Cos we are only people and we just make a fuss
That pin headed whizz kid, sure thinks he's got us sussed

Believes in one hack progress he's got a one hack mind
The only words he understands are forwards and behind
Never sees the choices he's blinkered and he's blind
That pin-headed whizz kid, he's really such a bind.