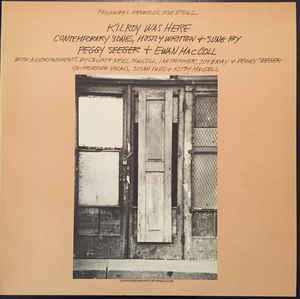 Has it ever crossed your mind to ask yourself why Mrs T talks funny,
Have you never paused to wonder why the lady's so obsessed with saving cash ?
Why she hates the working classes more with every day that passes,
Will she one day up and vanish in a flash,

If you have then I would ask you to forgive her.
She's only lately come to us from outer space,
She's a poor deprived commuter who was built by a computer,
She's an android, a stranger to the human race.

Has your nervous system never been upset by Mrs Thatcher's martial posture,
Have you listened to her laying down the law and not been scared out of your skin,
Heard her rattling her sabre, scaring all the friends and neighbours,
She's impatient for the next war to begin,

If you have, then show a little understanding,
The way that she was programmed it was really grim,
She was built to man the toll shack in a region called the coal sack
At the very furthest edge of the galactic rim.

Have you never had occasion to suspect when watching her speak on the telly,
And noticed the occasional wild look and sudden glazing of the eye,
She looks spooked, bombed out and funky, yes, and oddly like a junkie,
As the stuff begins to send one up on high,

If you have, then do not give way unto panic,
She doesn't mean to scare you, it is just a game,
Just remember what you're seeing's not a normal human being,
Though I grant you that it rather looks the same.

If you're under the impression that our baby-faced Lord Chancellor is a Terran,
Or that Heseltine or Prentice both belong to Homo Sapiens, you're insane,
And you suffer from delusions if you think Sir Keith is human,
Or behind those brooding pop-eyes lurks a brain,

They are exiles from a far galactic cluster,
They malfunctioned and were thrown out in disgrace,
They are made of wire and things and little wheels and bits of string
They are androids, strangers to the human race.