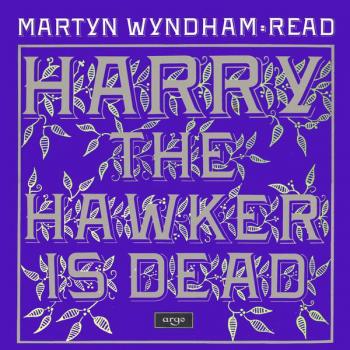 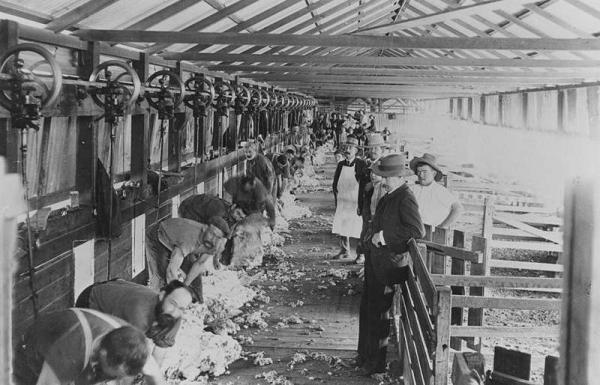 Australian shearers
We finished shearing sheep
Out west of the Paroo
But now it's rained three inches,
We don't know what to do.
A week ago the sand was loase
And dust blew every day,
But now the mud is three feet deep,
And we can't get away.

I've just been talking to the boss--
You all know Hector Cole--
He says the Bulloo's two miles wide
To cross it there's no hope.
You hear a lot of people swear
About the dough we make,
But they forget the price of beer
And all the combs we break.

Well, why I took this job on,
I just can't understand,
If the bloody sheep ain't waterlogged,
The cows are full of sand.
A man is doubled up all day,
Half-blinded by his sweat;
And when the darkness comes around,
Cooped up in a mozzie net.

It might have been a goad job once;
Those old hands had their breaks.
They pushed a bike from shed to shed
And lived on johnnycakes.
They had more time to do the job;
They worked nine hours a day,
And after paying for their grub,
One pound a hundred paid.

I think I'll give this job away
I'm sick of being greasy
I've heard about a fencing job
They tell me it's dead easy.

I was shearing outback, by a wayside track,
Where there’s never a thing that pleases,
Where the pines are tall and the gins are small,
What a cunt of a place, by Jesus.

I was run-arse first, as we fucked and cursed,
To the sheep, to the shed, to the engine,
The penner-up had a sure eyed pup
And the murderers kept us ringing.

The expert cunt had the tools all blunt,
And the headgear shook to pieces,
But I kept my pace in that louse-bound place,
And minced up the fuckin’ fleeces.

I hamstrung more than me pen-mate shore,
And it was ‘all go’, while it lasted,
The rouseabout was a Pommy lout,
And the Boss was a hungry bastard.

He wanted more wool, so he made us pull,
We fuckin’ near had to scrape ’em;
Gawd strike me blue, what a man should do?
Go jump on the bastards and rape ’em?

I was sick and sore of that fuckin’ whore,
He was one of those cunts that grizzles,
So I took a set on these stags of his,
And littered the board with their pizzles.

The rams they’d fetch, made our arseholes stretch,
Like an old gin’s cunt when you squeeze her,
My pen-mate strained, with his shirttail stained,
And his arse went off like a geyser.

How the Boss would rip, with his tin of dip,
He was up to his knees in maggots,
But little did he know, that with one mighty blow,
I took off his prize rams aggots.

The presser ‘Slim’ had a mind of quim.
His bales were all fucked and broken,
So the classer swine, made up his time,
And tracked him as a farewell token.

The greasy cook had a sore-eyed look,
All covered in scabs and rashes,
He stuffed our holes with his half-baked rolls,
And would have poisoned Christ with his hashes.

So, if you find me back in that louse bound shack,
I’ll be broke to the world and cringin’
You can jam the lot, up your dirty black twat,
And start with the fuckin’ engine.