Counting Bodies Like Sheep To The Rhythm Of The War Drums 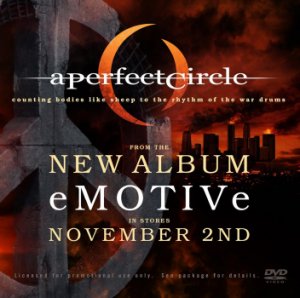 The song is particularly well known for the Music Video that went with it, which seems to be a straightforward attack on George W. Bush and the U.S.A.'s foreign policy of around 2004 (the year the album and the song were released), specifically the War on Terrorism and the U.S.A.'s interference in the Middle East. The video particularly seems to focus on the role of the media in these political issues.

The video is an animated video with a distinct, cartoonish style.

In chronological order, the following is shown:


* The video opens with a shattered peace sign.
* A pumpjack is turning, generating splashes of blood with every turn. In time, the whole screen turns red with blood running down from the top.
* Televisions depicting opened mouths seem to scream at the viewer.
* A boy is climbing a tree when a man on a horse (portrayed as Bush) drives by. Bush fires a gun and a television screen appears from the horse's behind. The boy sits down and watches the TV, while in the background planes are seen flying by and dropping bombs. The boy's head then turns into a sheep's head.
* A television with arms and legs grabs and eats the brains from a scalped kid.
* Bush now enters a classroom. He presses a button on a small device which then emits a laser beam. The laser beam fires across the classroom, setting on fire several books and then hitting a television in front of the class room, turning it on. The kids watching it turn into sheep.
* Bush drives an ice cream van and hands out Televisions on a cone to children playing in the street. The children lick their "ice creams" and turn into sheep.
* Bush appears mysteriously from a sofa in a living room where some children are playing and puts a television on the table. The children start watching the television and turn into sheep.
* Bush rides a chariot pulled by a sheep. Bush is wearing a bay laurel crown, associated mainly with Roman Emperors, and the background shows a desert-like landscape with some pumpjacks.
* Bush cruises a small motorized boat across a lake] of blood, while in the background a skyline of tall buildings can be seen. On the bloody lake, body parts of sheep are floating.
* Bush rides his chariot through a street with large buildings on each side. He grabs a microphone and changes the chariot for a military tank.
* Televisions fall from the windows on each side of the street, and when they reach the ground they form some sort of pavement for the tank to ride on.
* The tank is followed by a large herd of sheep. As people come out of the buildings along the street, they turn into sheep and join the herd.
* The herd walks through a narrow canyon built entirely out of televisions. When one sheep tries to climb the wall and exit the canyon, he is labelled by a laser beam emitting from the herd. A large hand comes out of the sky, throwing him into a meat cutter and turning him into a woolen coat. The large hand wears the Republican Party elephant logo on it.
* The tank and the herd continue their tour and in the background, the White House can be seen burning.
* A few sheep try to destroy one of the televisions by kicking them, and are then impaled with a stick, from which hangs a flag labelled "traitor".
* Bush leads the remaining sheep off a cliff and into a large fire.
* The television screen show only the face of Bush. His eyes seem to do an attempt to hypnotize the viewer while his mouth keeps moving slowly as though he is talking. In the background a droning sound can be heard that resembles marching of men.

The song also contains several noises in the background, such as:


* A locomotive train whistle, which can be heard before the singing. Supposedly this is the whistle of a train that was used to transport Jews to Concentration Camps during the Holocaust.
* Speeches by Hitler and perhaps Mussolini
* Near the end, the marching of what seems to be a World War Two German Military parade can be heard, which grows increasingly loud towards the end of the song. The only reason why it seems to be a German parade is the fact that it sounds like the soldiers are wearing jackboots.
* During a lull in the singing, you can hear what sounds like the moans of a couple having sex. At one point, it sounds as if a woman gasps the words "fuck me", while juxtaposed against a piece of a Hitler speech.
* There is also a moderately high pitched buzzing noise throughout part of the song, a saxophone played by Jason Freese.


(en.wikipedia)
Don't fret precious I'm here, step away from the window
Go back to sleep
Safe from pain and truth and choice and other poison devils,
See, they don't give a fuck about you, like I do.