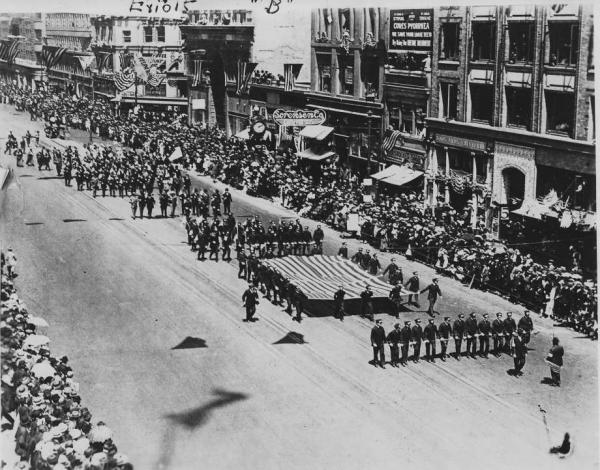 Ralph Chaplin mugshot
For freedom die? but we were never free
Save but to drudge and starve or strike and feel
The bite of bullets and the thrust of steel.

For freedom die, while all the land can see
How strikers writhe beneath thy crushing heel
And mothers shudder at the thought of thee!
For freedom die... ?

Defend the flag? beneath whose reeking fold
The gun-men of our masters always came
To burn and rape and murder in thy name!

Defend the flag whose honor has been sold
And soiled until it is a thing of shame—
The brazen paramour of Greed and Gold—
Defend the flag... ?

Protect our land? we, who are dispossessed.
And own not space to sleep in when we die!
The continent is held by thieves on high—

The brood of vipers sheltered at thy breast.
Your "liberty" is but a loathsome lie:
We have no homes nor any place to rest—.
Defend our land... ?

Resist the foe, we shall! from sea to sea
The lewd invaders battle-line is thrown:
Here is our enemy and here alone—

The Parasite of world-wide industry!
His wealth is red with mangled flesh and bone.
Resist the foe, ah, crush him utterly—:
Resist the foe... !!!