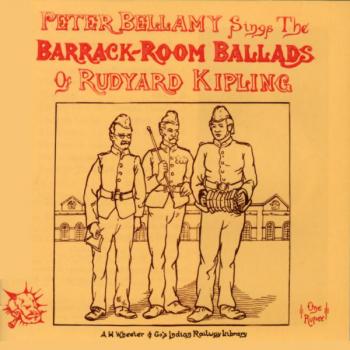 “A Tommy's attitude to Empire was perhaps not quite that of the stay-at-home Englishman; there is pride in this song, but it is by no means the complacent “Right to Rule” imperialism which was prevalent at the time and which is so often mistakenly attributed to Kipling by his modern critics. […] As in the previous song [The Widow at Windsor], this piece suggests the ambivalence of attitude which a Tommy might have felt about Empire and his role in winning and maintaining it. The form is once again that of the traditional Question/Answer ballad, and the whole fits admirably to the old North Country tune Doli-A, most famous these days as the tune to which Stan Kelly wrote his Liverpool Lullaby.”
(Peter Bellamy)

La Vedova è la regina Vittoria e le feste sono quelle che lei dava in giro per il mondo, dove però erano i soldati a ballare, conquistando sempre nuove colonie per il possente Impero, morendo come mosche in battaglia, di malattie, di malnutrizione… La Vedova con i suoi party non faceva che creare in continuazione stuoli di nuove vedove…
“Where have you been this while away,
Johnnie, Johnnie?”
Out with the rest on a picnic lay,
Johnnie, my Johnnie, aha!
Well they called us out of the barrack-yard
To Gawd knows where from Gosport Hard,
And you can't refuse when you get the card,
And the Widow gives the party.

“What did you get to eat and drink,
Johnnie, Johnnie?”
Standing water as thick as ink,
Johnnie, my Johnnie, aha!
A bit o' beef that were three year stored,
And a bit o' mutton as tough as a board,
And a fowl we killed with a sergeant's sword,
When the Widow give the party.

“What ha' you done with half your mess,
Johnnie, Johnnie?”
They couldn't do more and they wouldn't do less,
Johnnie, my Johnnie, aha!
They ate their whack and they drank their fill,
But I think the rations has made them ill,
For half my comp'ny's lying still
Where the Widow give the party.

“How did you get away—away,
Johnnie, Johnnie?”
On the broad o' my back at the end o' the day,
Johnnie, my Johnnie, aha!
Well I comed away like a bleedin' toff,
For I got four niggers to carry me off,
As I lay in the bight of a canvas trough,
When the Widow give the party.

“What was the end of all the show,
Johnnie, Johnnie?”
Ask my Colonel, for I don't know,
Johnnie, my Johnnie, aha!
Well we broke a King and we built a road—
And a court-house stands where the reg'ment goed.
And the river's clean where the raw blood flowed
When the Widow give the party.