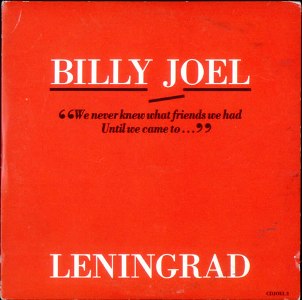 
The song was written by Billy about a Russian clown named Viktor Razinov, whom he met while touring the Soviet Union in 1987. Throughout the song, major items of Viktor's and Billy's lives are compared to show the cultural differences and similarities of the United States of America and the Soviet Union.

In the song, Billy describes Viktor's life as one of many Soviet children who lost fathers during World War II, specifically during the siege of Leningrad. He enlisted in the Red Army, drank vodka to fight the pain, and then became a circus clown, bringing joy to Russian children.

Billy described his childhood life as being "born in 49, a cold war kid in McCarthy time." He briefly describes his life living in Levittown, and the fear of the Cuban Missile Crisis. Billy also makes a reference to the Korean War, a proxy war to the Cold War, as well as the Vietnam War.

In the end, the two meet after Billy's Leningrad concert (Viktor had journeyed across Russia to see all six of the Russian concerts), where Viktor draws a laugh from Billy's daughter Alexa, then they hug. In the song's last line Billy sings, "We never knew what friends we had, until we came to Leningrad."

The quote is printed on the single cover, but not on the cover of the 4 track CD, which instead features the titles of the extra songs: "Goodnight Saigon", "Vienna", "Scandinavian Skies".

In 2015 Viktor traveled to New York to visit Billy Joel's concert in Madison Square Garden. For this reunion Billy played Leningrad, which he rarely plays live.

I was born in 49
A cold war kid in the McCarthy times
Stop 'em at the 38th parallel
blast those yellow reds to hell
cold war kids were hard to kill
under their desks in an air raid drill
haven't they heard we won the war
what do they keep on fighting for?

Viktor was sent
to some red army town
served out his time
become a circus clown
the greastst happiness
he'd ever found
was making russian children glad
when children lived in leningrad.

The children lived in Levittown
hid in the shelters underground
Til the soviets turned their ships around
torn the cuban missiles down
and in that bright October sun
we knew our childhood days were done
I watched my friends go off to war
What do they keep on fighting for?

So my child and I came to this place
to meet him , eye to eye and face to face
He made my daughter laugh
Then we embraced
We never knew what friends we had
Until we came to Leningrad.