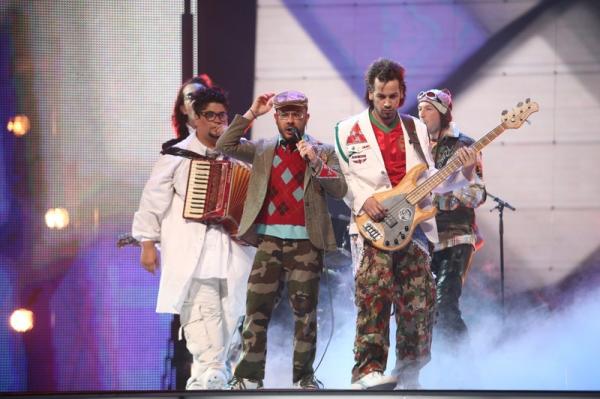 "I know this song is not political. It does warn against the perils of a nuclear war and crazy leaders who might push the button. Some may think it refers to Israeli leaders, some may think it talks about other countries’ leaders. We are not taking sides. The message we wish to convey is that all we want is to live, smell the flowers bloom and have fun. Last year all of Europe had a laugh on horror movies monsters from Finland. This year we give the opportunity to laugh on the living monsters among us”

There’s plenty of suffering
In the streets there’s too much violence
And we’re lucky to be alive without being wounded
Tactical advances, fanatical regimes
This tragic situation bring tears to my eyes

Messages explode all around me
Missiles fly around and fall on top of me
Cops and robbers run all over me
Stompin’ down on me, messin’ around with me

Alelai, Alelai, are you there, God, it’s me?
This nightmare’s going on just way too long for me
When I’m barely alive, the target’s aimed at me,
Might be too early to say
“I Gave My Life for Thee”

Why, why, police patrol
Wow, wow, paramedical
Here it is in the prelims, a song with no “salam”
Red’s not just any color, it’s more like blood
Again I stop the breathing in my heart
So no one’ll bust out with the CPR
Mortal soul, neverending war
Boom, boom, that’s what goes on here
Between a rocket and machete,
Reporter and viewer
Unfair advantage and a hostage,
Heat wave and wet weather
Escalating up the stairs, locate on the border
Nothin’, nothin’, that’s what everybody’s doin’
Officers officiate, officers contemplate
Naïve people moderate, while statistics they await
They retaliate: we’re all resigned to fate

In a world crammed full of demons,
We’re nothing but miniscule peons
And champions with Jetons
Decide what the deal will be
Lazy managers give orders,
An ocean liner filled with water
And everybody drinks to life while
We sink underneath the sea

Could be… far too risky… I should sing a song of carob trees, a desert void of flags

Still, I’m… alive, alive… and if it keeps on being so scary
Then I will simply say,