You just go on and on improvising as you go, and getting in lots of rich harmony. This song is an example of how in the integration movement in the Southern states new words are always being put to old tunes, at meetings, on picket lines and in jail. Like this ones most of the tunes-are old church hymns. 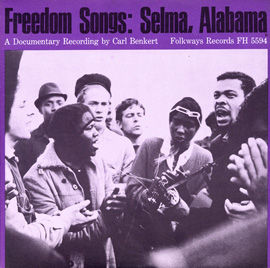 On February 18th, 1965, Jimmie Lee Jackson was fatally shot by an Alabama state trooper during a peaceful protest. The shooting inspired a march from Selma to Montgomery on March 7th. As the six hundred protesters reached the Edmund Pettus Bridge to cross the Alabama River, state troopers and local police blocked their path and ordered them to turn around. When the protesters refused, officers shot tear gas and beat some of the protesters with clubs. More than fifty people were hospitalized during the march, which became known as “Bloody Sunday.” A subsequent march on March 9th also was stopped, this time without violence; finally, later in March, a larger, better organized third march successfully reached Montgomery. Partially as a result of these protests, on August 6th, 1965, the U.S. Congress passed the Voting Rights Act.

In the cotton fields, Freedom...

Get yourself a little freedom

In the factory freedom

In your neighborhood freedom

We don't care we'll get freedom