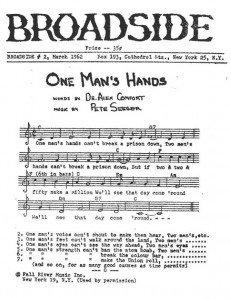 Bill Brown was born at half-past two
The doctor said that he was blue
He doubled up his little fist
But the doctor put him on that list.

The years went by, and he started school
Where segregation was the rule
As soon as Bill came into sight
They put him on the list as white.

He went to work to earn a buck
The pay was poor, the job was struck
The boss declared, "I've had my fill"
And on the blacklist went young Bill.

Jobless Bill sang to the skies
"Workers of tho world, arise!"
They said he was a Communist,
And put him on another list.

He’s gone and left his old home town
This red-white-and-blue, black-and-blue
Bill Brown
Yet, wherever he may be
He's just plain Bill Brown to me.