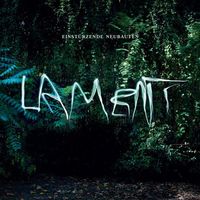 Pitched straight, this is Neubauten’s bitingly witty reconstruction of a commonstock national hymn rooted in an old anthem variously shared by a number of participants in the war, including the UK, Germany and Canada. That the major opposing powers were ruled by related monarchs didn’t blunt their desire to beat each other down. Here, the lyrics change language every two lines over its overfamiliar sombre melody.

The song changes tack in the last verse, which overwrites the multilingual doffed cap tributes to Europe’s monarchs with a few scathing lines of beery doggerel scrawled by Heinrich Hoffmann, author of Struwwelpeter/Shock Headed Peter.

The royal court was not amused, jailing Hoffmann for his wit. The last stanza is an anonymous persiflage which compared a king’s feasting on Christmas goose to his people’s diet of potato and herring pricks scraped from packing paper
Heil dir im Siegerkranz,
Herrscher des Vaterlands!
God save the King!
Krieger- und Heldenthat
finde ihr Loorbeerblatt
Long to reign over us;
an deinem Thron!