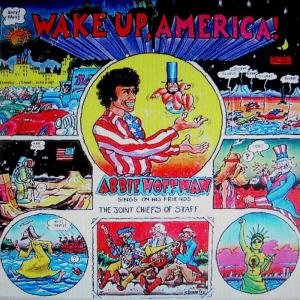 The album Wake Up, America (Big Toe Records # 1) contained several references to Vietnam, such as the tracks "Our National Anthem", "Chicago", and "The Drug Company". On the track "Texas Tweezers" Hoffman took a phone call on a radio show. The caller attacked Hoffman for being ignorant, an exhibitionist, and for criticising the country, which, according to the caller, would have got him killed in Russia. Hoffman responded by arguing that the US "killed a million people in Vietnam" which damaged her reputation. He then rhetorically ask the caller "what do you think My Lai was, a god damn Connie Island trip".
Caller:
"Mr. Hoffman...I just want to say...you have myopic point of view...
You have no conception of what life is all about. I accuse you of
Being a fraud, you're an exhibitionist...If this country were run by
People like you...society couldn't exist with creatures like you
You show your ignorance of what American is about, your constant
Criticism, you wouldn't exist in Russian for five minutes, you'd be on
The firing line...the people in power made this country what it is"

Hoffman:
"You damn right they did! What the hell is it man? I mean we killed
A million people in Vietnam, don't you think that is damaging the
Public image of the country? They killed a million people, what do
You think My Lai was, a god damn Connie Island trip"