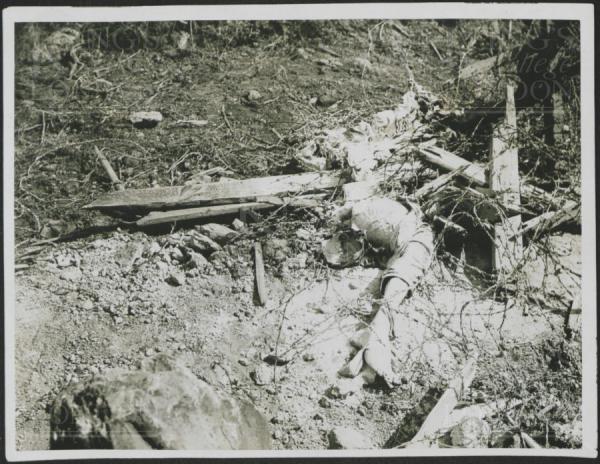 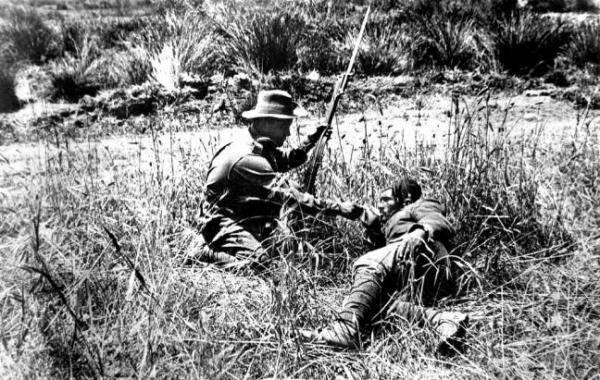 Un soldato australiano offre dell'acqua ad uno turco rimasto ferito, Gallipoli 1915
I buried a Turk in a darksome gorge by officer's orders one evening grey –
I had finished my 'twenty-four hours on' and was leaving the trench at the close of day.
"You must dig him in" - and the officer smiled; "he'll need no volleys or muffled drums –
He's been in the sun for a week or so, and it's perfectly awful the way he hums!"

So I filled my pipe ('twas a needful thing), and I got in a blast ere I ventured near.
And I found him lying in shape grotesque 'neath an ominous cliff that was grey and sheer.
He’d crawled to a shelter of prickly scrub - and I never could tell you how looked his face –
But his horrible eyes were blindly turned to a thing he held - 'twas a portrait case!

Though little I worried for sights, and smells, but this was a sight that it hurt to see,
For I fancied he clutched it in mute appeal ... and he seemed to be holding it out to me.
And little and all as I liked the job, ere I started to cover him o’er with sand,
I dropped me shovel and pick, and stooped and took the thing from his grisly hand.

Oh! piteous thing in the sight of death - 'twas the face of a beautiful dark-eyed boy:
A kiddie of six years old or so, who hugged to his bosom some childish toy.
And his teeth peeped out in a roguish smile, and round the forehead the dark curls clung –
As pretty a picture as e’er was seen of cherubic innocence sweet and young.

Some wonderful writing in big, wide text was scrawled on the back of the photograph.
And I said, "Old fellow" - to him who lay -"would you ask for a lovelier epitaph?"
'Twas Turkish of course, and I could but guess but in good British I'll swear 'twas this:
"With love to daddy, and please come home". . . and marked with a crescent to mean a kiss.

There's little of sentiment one can feel when it's each for himself in the firing line
But I couldn't but mutter a useless prayer that he hadn't gone under to shot of mine.
And I pictured the woman who sits at home and waits with a longing supine and dumb
For the `daddy' who lay in the darksome gorge - for the steps of a husband that ne'er will come.

The shades of evening were drawing nigh ... and a soldier has always work to do,
But I laid the picture upon his chest ere ever a shovel of dirt I threw,
And I fashioned his mansion as best I could and I patted it even and smooth and fair.
And I stood to attention and raised my hand in a last salute as I left him there.