>>> Beautiful and triste at the same time 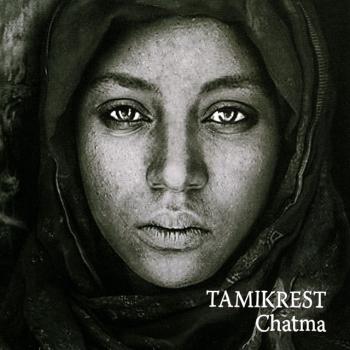 Tamikrest is a band of musicians belonging to the Tuareg people. Originally hailing from Kidal, in the northeast of Mali, as the result of ongoing war, persecution and political collapse, most of the band now lives in exile in Algeria. They sing in the Tuareg language Tamashek.
"Tissnant in Chatma Nine" is a song from the album Chatma. In Tamashek "Chatma" means "Sisters" and the band has dedicated the album in their own words to: "the courage of the Tuareg women, who have ensured both their children's survival and the morals of their fathers and brothers". As a kid growing up in the deep Sahara, Ousmane ag Mossa decided he wanted to become a lawyer – or rather an "advocate" for his people, the semi-nomadic Tuareg of the southern Sahara, who have been marginalised and demonised for the best part of 50 years. But the Tuareg don't have lawyers, so he became a musician instead. In effect, it amounts to the same thing.
The success of Tamikrest – the band Ousmane founded with his mates in the war-weary town of Kidal, northern Mali, a decade ago – has given him a more potent platform than any lawyer could hope for. The singer, songwriter and guitarist can talk for hours, with furrowed brow, his voice just above a whisper. There isn't any aspect of northern Mali's recent season in hell Ousmane hasn't chewed over.
Its jagged guitar hooklines and rolling desert grooves underpin themes that are almost universal in Tuareg guitar music: homesickness, loss, the beauty of nature, and – above all – the need for the Tuareg to wake up, unite and take control of their own future.

"If we'd been united, what happened in 2012 wouldn't have been possible," he says, referring to the hijacking of a Tuareg revolt against the Malian government by al-Qaida in the Islamic Maghreb (Aqim) and other armed militias, who imposed an alien and hardline creed of Islam on the local population. The Malian government has been trying to conflate the Tuareg struggle for autonomy with global jihad for at least a decade, even though the Tuareg cause predates the birth of al-Qaida by at least 30 years. "Politicians profited from that lack of unity. Some Tuareg took up causes – like imposing sharia law – that have nothing to do with what most of us have been fighting for all our lives."

His dream of independence for the Tuareg is uncompromising. Not for him the cooing mood music of national unity and fraternity that is currently being piped all over Mali, with its newly elected president. His people have suffered too much to go back to the status quo. Especially the women. "They are suffering in a way they've never known before", he says. "But they will always resist and claim their own freedom, until the day they have their own territory".

The difficulties faced by women include trying to subsist in overcrowded, disease-ridden refugee camps, which have sprung up in neighbouring countries as many of the people of northern Mali fled. But there are also the strictures imposed on women by the Aqim mujahideen. They can't dance, can't play music and must be covered from head to toe. Tuareg women have always enjoyed more power and freedom of speech than their counterparts in the Middle East. And yet, by dint of the obscure machinations of a handful of Tuareg leaders, the Tuareg cause has become confused with that of global jihad in the minds of many. Ousmane, like many other Tuareg, believes this was deliberate.

"I totally understand what happened in respect of Al-Qaida and their allies", he says. "It was the role of the Islamists – well, not Islamists, because Islam is something else, but rather the terrorists – to treat people in such a severe way, so that all they wanted was peace. They wanted the population to feel the absence of a government and all the chaos that resulted from that. So all those people – men, women, children, old people – didn't want to hear about revolution any more, or their rights."

Ousmane's weapons, however, are a mic and a guitar. The whole idea of a Tuareg nation with a unique cultural identity was instilled into this vastly dispersed people by means of music. If Tamikrest don't sound a great deal different from their mentors Tinariwen to western ears, it's because their struggle is essentially the same. "This music was founded on a very precise cause, the Tuareg cause," Ousmane says. "In a great sense, we are the children of Ibrahim [Ag Alhabib, founder of Tinariwen]. I'm very influenced by his music, and his touch on the guitar."

Back in their desert home, Tamikrest are possibly even more popular among the youth than Tinariwen. In many ways, Tamikrest carry the burden of "fronting" this young Saharan generation so buffeted and lashed by recent events. Their priorities are clear: unity, education, development and peace – but not at any cost..
Eri sinan matogdah tissnant tadjan man,
neri ikyadan chatmasse aldhachnen azegzan

compare to original
Language: Italian
English version
THE SUFFERING OF MY SISTERS

Anyone watching his sisters
Who are suffering and patiently tired

Waiting for freedom,
Prevented by hatred cultivated among brothers,

Which is also preventing unity

Beautiful and triste at the same time