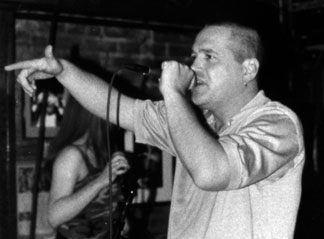 Chris Byrne, aka Seanchaí
Walking into Rocky Sullivan's, you might expect to find an Irish pub offering pints of Guinness and, if you're even slightly familiar with its reputation, a good political debate. But on Friday nights, the joint is jumping to the only Celtic-influenced hip-hop band on either side of the Atlantic. Seanchai (pronounced shan-a-kee) and the Unity Squad take the stage each week with their mix of hip-hop, rock, reggae, and traditional Irish music. With the in-your-face politics of Northern Ireland and laments about the commercialism of hip-hop, lead rapper and songwriter Chris Byrne meshes these eclectic styles. DJ Flo mixes it up on the turntables, offering the hip-hop backdrop that drives Byrne's slamming rap rhymes. Adding Fenian flavor is David Monaghan on the mandolin, Dublin-born vocalist Rachel Fitzgerald, and Byrne himself on the tin whistle, uilleann pipes, and bodhran. It doesn't take long for the audience to hit the bar's small dancefloor. Byrne began his rapping career with Black 47 and now takes it to a higher level with the Unity Squad. In the tradition of hip-hop, he offers up celebrations of his native Brooklyn in songs like "718 Baby" and "A Sunday at the Turn of the Century." But his politics are never far behind. In "Rebel Hip Hop," he berates the industry's rampant materialism: "Gold chains and clever rhymes/I see chains as somethin' to be broken/Wrap 'em round ya neck, look it, you're chokin'/On the same old thing that keeps the people down/Ya should know by now a real king wears no crown/Versace, Hilfiger, minks, or sable/When I shop for gear, I look for the union label." Though Byrne cites Public Enemy, Grandmaster Flash, KRS-ONE, and 3rd Bass as early influences, he also notes "summers spent in Ireland with no TV," where he listened to the spoken rhythms of storytellers and ballad singers. "I Am Garvaghy Road"&emdash;which blasts the annual English Protestant march through the Irish Catholic enclave&emdash;is perhaps the most distinct blend of those two major influences. The song offers a staunch chorus typical of Irish traditional music

It proves the band can as easily segue into an Irish reel with uilleann pipes and mandolin as they can a hardcore rap with DJ Flo feeding in Motown, reggae, or early-'80s dance music. Then Fitzgerald takes center stage with a version of the traditional ballad "Field of Anthenrye," which surpasses the conventionally slow-paced rendition. By adding a strong beat compliments of DJ Flo, the crowd favorite allows fans to abandon the old 45-record version of their parents' generation.

From this cache page
Right from the start this here's a rebel song
It's from the heart I wanna tell you 'bout a wrong
Committed by Britain back in the day
Fourteen murdered - they refused to be slaves
To the crown, in Derry town
They wouldn't bow down so they were shot down
A peaceful protest, the turnout was large
So the soldiers decided to show who was in charge
Vexed so they flexed, did what paras can do best
When the smoke had cleared fourteen were laid to rest
No riots, no lootin' to start off the shootin'
People emulated King, not Seal, not Newton
Things forever changed after that afternoon
Brothers started doing what they had to do
On Bloody Sunday

How long must we sing this song
Til the government admits that they were wrong
And finally show some decency
Reparation to each family.
Treat our people with some dignity
You know their shit really gets to me
The way they try to deny my history
Twenty-five years on our people getting strong
Thought may hit the Brits that it's time to move on
Order the border to be cast out to sea
Cause that is where it was meant to be
And that would be an appropriate way
To honor those who were slain
On Bloody Sunday