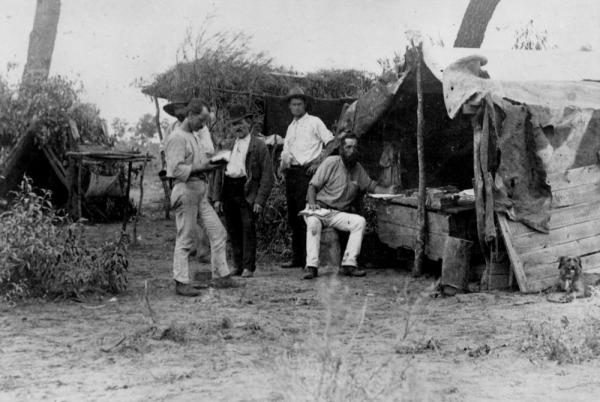 La Palmer e la Bridges scrissero questa ballata nel 1951 e non a caso. Erano infatti gli anni in cui il ‎Governo conservatore di Robert Menzies cercava di varare tutta una serie di leggi contro i diritti dei ‎lavoratori. E “The Ballad of 1891” divenne uno dei loro inni, sessantanni dopo la vicenda che ‎racconta.‎
The price of wool was falling in eighteen ninety one
The men who owned the acres saw something must be done
‎"We’ll break the Shearers' Union, and show we're masters still
And they'll take the terms we give them, or we'll find the men who will."
‎
From Claremont to Barcaldine, the shearers' camps were full,
Ten thousand blades were ready to strip the greasy wool,
When through the west like thunder, rang out the Union's call:
‎"The sheds'll be shore Union or they won't be shorn at all."
‎
Oh, Billy Lane was with them, his words were like a flame;
The flag of blue above them, they spoke Eureka's name.
‎"Tomorrow," said the squatters, "they'll find it does not pay.
We're bringing up free labourers to get the clip away"
‎
‎"Tomorrow," said the shearers, "they may not be so keen
We can mount three thousand horses, to show them what we mean"
‎"Then we'll pack the west with troopers, from Bourke to Charters Towers.
You can have your fill of speeches but the final strength is ours!"
‎
‎"Be damned to your six-shooters, your troopers and police.
The sheep are growing heavy, the burr is in the fleece!"
‎"Then if Nordenfeldt and Gatling won't bring you to your knees,
We'll find a law," the squatters said, "that's made for times like these!"
‎
To trial at Rockhampton the fourteen men were brought;
The judge had got his orders, the squatters owned the court,
But for every one that's sentenced, ten thousand won't forget.
When they jail a man for striking, it's a rich man's country yet.‎