I Have Seen the Enemy 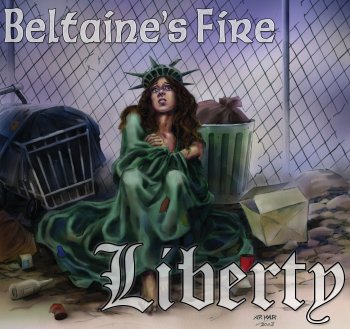 "Who's the Enemy?"
Taking it's chorus from the David Rovics song of the same name , this track examines exactly who and what "the enemy" really is. Is it a person? Or is it something a bit more insidious?

Liberty is the second album from Bay Area anarchist folk-rap collective Beltaine's Fire. The band combines live hip hop, funk, and rock with traditional Irish, Scottish, and Folk to create something utterly original; and delivers it alongside sizzling insightful lyrics that cut to the dark heart of American Imperialism.

This is revolutionary music in every sense of the words.

The Enemy
"I have seen the enemy, he's right there in the spotlight
and if this song were a rifle, I would have him in my sights."

It's the voice on my radio, the face on the TV,
Cameras in the streetlights, so the pigs can see me
It's the billboards, the papers, the bus stop ads
Advertising anorexia, the latest fads
It's the way my little brother is scared to speak his mind
And when he does he speaks softly, lookin' behind
it's carnivore scanning my email for keywords
the way people shrug and say "it could be worse"
living in a nation where apathy reigns
no one is moving, so they don't notice chains
It's the climate of fear, the unspoken consensus
That things are messed up, but there's no way to end it
It's giving up the struggle before it's even started
And thinking that those who fight back must be retarded
the enemy's the fishbowl, we don't know we're in
until the table shakes and the cat reaches in

it's the cloud of apathy hanging over America
so when you talk about change, people stare at ya
how folks work themselves to death, just to live
it's the fairy tale corporate religions that give
folks hope for something better, but deny them the right
to demand something better, to organize and fight
it's the way poor people get sucked into wars
'cuz they promise us money for schools we can't afford
it's the media, the cops, the whole prison system,'
it's race and class and every politician,
the sell outs, the fakes, the radio stations
the schools and the colleges that teach domination
the fundamental institutions of our society
the paradigm that lets the rich choose our reality
it's the way you motherfuckers think that things changed
just 'cuz the CIA hijacked some planes

I see the enemy daily, when I look into the mirror
He's the cop in my head, couldn't be any nearer
He's the voice that tells me to just stop fighting,
that no one likes my music, so I should stop writing
it's my fear and my pain, and own self-doubt
that makes me want to turn off and just drop out
it's the feeling that one man can't change shit
and that no one gives a fuck about the words I spit
the way I was taught there was something wrong with me
cuz I was born with a soul that demands to be free
it's the "White Privilege," I'm tryna overcome
how my people got bleached, what we've let ourselves become
It's the "I got mines," the "don't give a fucks"
that would sell out their neighbors, just to make a buck
it's the way everybody wants a little bit more
the brass ring in the spotlight, we're all reaching for