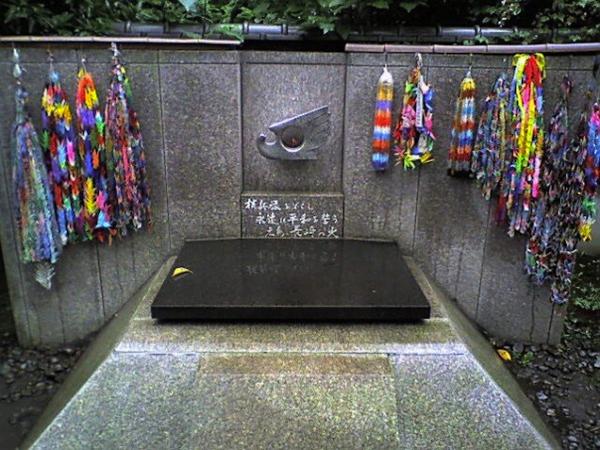 "The Flame of Hiroshima and Nagasaki has been burning since it was carried from the destruction of the atomic bombs dropped on Japan during WWII.
It was initially kept out of resentment, but turned into a symbol of desire for peace and the abolition of nuclear weapons. I wrote this song while I was in Japan and watching the US news discuss North Korean and Iranian nuclear developments..

I have a really hip big band arrangement of this that's just waiting to come out and play.. "
Deep in the heart of the city,
Behind all the schools and the roads,
A green copper lantern, and a gate in the rain
Are keeping their watch over a voice in the cold.

The voice is the heart of the people,
The people whose prayers are the same.
10,000 paper cranes hang weeping beside
A Dove and the Nagasaki Flame..

Here in the east capital city,
I found a man with my Grandfather's core.
Each served his country in a generation of hate,
Making them enemies by the theories of war..

His face shown with the comfort and the passion
Of a life lived kindly for years,
But behind those dark eyes, in a place far beyond,
Lies a deep, thick, inescapable fear.

Official studio version recorded in 2016
album: All the Stars You Hold [Travis Knapp, 2016]