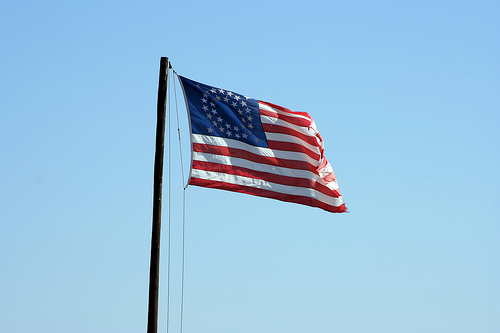 In the spring of 1864 the Cheyenne and Arapaho were ready for peace. They met with US Officers, Evans and Chivington, at Camp Weld outside of Denver. No treaties were signed. The Indians were offered a sanctuary at Fort Lyon. Black Kettle and over 500 Cheyenne and Arapaho travelled south to set up camp on Sand Creek, near Eads, the town later built on top of the massacre site. Some dissenters headed north to join the Sioux.
General Samuel Curtis sent a telegram, "I want no peace till the Indians suffer more". 700 Cavalry volunteers called "100 Dazers", assembled in Denver. The camps of Chief Black Kettle, White Antelope, Left Hand and others, lay in the valley before them. Chivington, with mostly drunken troops, headed to Sand Creek with 4 Howitzers. 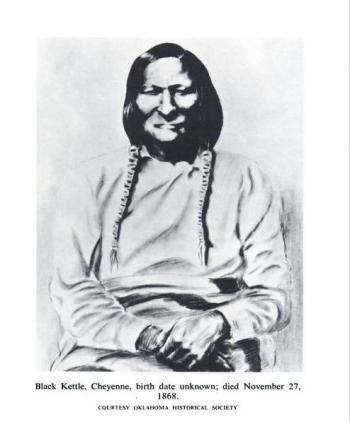 Black Kettle raised both flags of peace. Chivington raised his arm for attack. Cannon and rifles pounded the camp. The Indians scattered. The frenzied soldiers hunted down and murdered the men, women and children. A few warriors managed to fight back. Silas Soule of Massachussets did not allow his soldiers to fire into the crowd.
Troops continued the murders all day. One bragged about killing 3 women and 5 children who were screaming for mercy. They murdered all the wounded, mutilated and scalped them. They cut open the pregnant women’s bellies and laid the fetus on the bodies. They plundered tepees and divided up the herd of horses. Black Kettle’s wife was shot 9 times and survived. The Cheyenne Dog Warriors who opposed the peace treaty provided sanctuary for the survivors.
The Colorado volunteers returned to Denver as heroes, with scalps of women and children. Colorado residents celebrated. Chivington appeared on a Denver stage telling war stories and displayed 100 Indigenous scalps, including pubic hair of women. Many of the élite of Denver society today are the children of these murderers.
Eye witnesses came forward and reported the murders. Silas Soule testified against Chivington, and was murdered by Charles Squires. It was found to be a carefully planned massacre. Asked why kids were killed, "Nits make lice", said Chivington.
As word of the massacre spread, the Indigenous resistance to white expansion stiffened. This massacre led to the Little Big Horn battle on June 25-6, 1876 where General George Custer and his men were wiped out by the Lakota lead by Crazy Horse and Sitting Bull..
In December 29, 1890, the US 7th Cavalry commanded by Samuel M. Whitside lead the massacre of over 350 Lakota at Wounded Knee Creek.
We have had to live with these horrors since the arrival of the invaders, while they send their "cry babies" to doctors for counselling.
That mindset to slaughter people was brought here. 80 are shot and killed daily in the US, not counting stabbings and death by other means.
Orders always come from the top. On December 26, 1862 Lincoln sanctioned the hanging of 38 randomly picked Indian men and boys without trial, the largest mass hanging in US history. One week later, January 1, 1863, Lincoln signed the Emancipation Proclamation to free the slaves. The Blacks then formed the regiment called the Buffalo Soldiers who proudly massacred the Indigenous for their masters. Today both races celebrate their plunder with medals and the theft of our land.
Was James Holmes trying to mimic the mindset of those Denver people? If he is insane, then Washington, Grant and Lincoln, and all the other presidents who gave orders to totally annihilate us, are all insane as well.
The Americans must be reminded of this continuing genocide. If they don’t know their history, it is bound to repeat itself. The lesson is: be careful what you ask for, you might just get it.
The movie-goers went to the theatre to see murder, death, chaos and plunder. Then they got it for real.. As Bob Marley sang about, "Buffalo soldier, dread-lock rasta".
A banner year 1864, don't want the Redman anymore,
Can't have them taking up good land.
Give them a token flag,
trade pipes and shake some hands,
Tell them the white stripes stand for peace..

Say if they raise red white and blue,
Blue coats will never shoot at you,
But stripes will loose their sheen,
Black Kettle was their chief,
He only wanted peace,
Under the flag...a massacre at Sand Creek..

A banner year 1868,
a bitter end a twist of fate.
Maps won't hold this melanoma,
Blurry part of Oklahoma..
Where Custer shot and killed Black Kettle.

A promise is a promise,
A judge of character.
His banner over me is love.