The Charge on Mother Jones 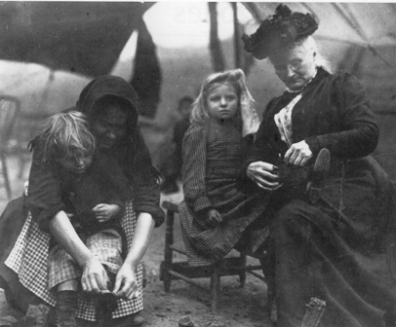 Su Mother Jones si veda anche Mother Jones' Will di Nimrod Workman.‎
The patriotic soldiers came marching down the pike,
Prepared to shoot and slaughter in the Colorado strike;
With whiskey in their bellies and vengeance in their souls,
They prayed that God would help them shoot the miners full of holes.
‎
In front of these brave soldiers loomed a sight you seldom see:
A white-haired rebel woman whose age was eighty-three.
‎"Charge!" cried the valiant captain, in awful thunder tones,
And the patriotic soldiers charged and captured Mother Jones.
‎
‎'Tis great to be a soldier with a musket in your hand,
Ready' for any bloody work the lords of earth command.
‎'Tis great to shoot a miner and hear his dying groans
But never was such glory as that "charge" on Mother Jones!‎