The Palestinian Holocaust
[2010]
Lyrics & Music by Aka DankO 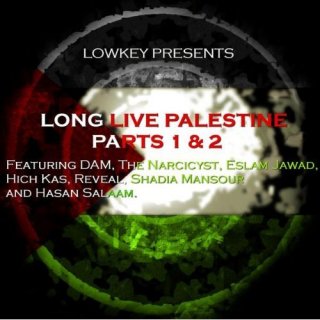 featuring DAM, The Narcicyst, Hasan Salaam, Shadia Mansour
[Intro:]
Not every Zionist is Jewish,
And not every Jew is a Zionist...

[Lowkey:]
The government supports but people of the UK didn't,
Zionism is not compatible with Judaism - the hijacked faith,
The state is misrepresenting,
Israel equals displacement and ethnic cleansing..
I know I'm on that list, for being more verbal, curse
every Zionist since Theodor Herzl,
Balfour was not a wise man,
Shame on Rothschild,
Between them the monster they created has gone wild.

[Tamer Naffar (DAM):]
We are people who were sieged by the enemy.
Betrayed by our brothers.
You won’t feel heroic ???
Withdrawal from Iraq, like a locust invasion
Left only destruction,
No punishment,
How many mouths were silenced?
How many mothers left devastated?
My freedom begins when the one who took it pays the price.
Mr. Judge, open your eyes, open your ears,
How many evidences scream against him...
Give me my freedom, and tie up his hands.

[The Narcicyst:]
Tears to laughter,
Our children don't fear disaster,
Living near the master,
Clear the facts,
Hear the casket,
We rap and we die from bombastic times,
that's frantic aha
Summer days in the thunder blaze,
They merk their dreams like Theodor Herzl screams,
In the UN and '48, third Intifada
for mothers, daughters,
Sons martyred and empty fathers.

[Eslam Jawwad:]
The right of returned,
A whole people got imprisoned.
Bullets are falling like rain
Rain is falling hard
Breaths are cut,
Take the bird out of its cage,
Go fly away,
Go show my blood to the world.
This is my sin,
I'm waiting for my Savior, for Isa.
The only hope I have left is my God.

[Hich-Kas:]
Even though all they do on TV is lie,
I was watching the news,
You can see the tears of mothers falling on earth,
The kids are sweet,
Show them that they take the hands of kids who just learnt how to talk and..load it...shoot,
This is what I saw on the news.


[Reveal:]
Israel is a terrorist state,
The evidence is quite obvious,
War criminals use illegal weapons like white phosphorus,
Burns your flesh to the bone,
And if you happen to live,
You'll be left infected with cancer,
You'll curse the fact that you did,
Forgive me if I wish the same fate on those Israelis,
Responsible for killing all those innocent little babies !!
I studied the Torah and learnt by their own admission,
Israel's actions are not kosher in their own religion.

[Mahmoud Jreiri (DAM):]
I look around me, I find no life.
They took my land from under my feet,
And gave me only suffering.
We used to carry "Torreyeh" (A planting tool)
And God gave us our livelihood,
Now we carry a rifle,
And on God we depend.
Massacre, Slaughter,
Everyone has seen it on the screens
Not today, not the West Bank, not Gaza.
Look closely in the pages of history,
Look at Christ,
People are getting crucified in Palestine for over 60 years.

[Hasan Salaam:]
The Devils got an unholy plan for the Holy Land,
So I hope my Qurān,
Cuts the power in the other hand,
Damn,
No oasis just bloodstained sands,
Settlements settin' up to eliminate child, woman and man..
No such thing as the Middle East,
Brother they deceiving you,
No matter where you stand there's always something to the east of you,
So whether it's the Mossad or the FBI policing you,
It's all one struggle till the final breath is leavin' you.

[Shadia Mansour:]
(We should, Know, How, Why)
Arabic people, our unity is our skeleton,
We should learn how to think,
We should learn how to deliver a message without shutting doors in our faces.
I wouldn't have known what good for me,
If I haven't seen what good for others.
Take my words as experience, not an insult.
(We should decapitate the head of the monster)
So it loses its way, and its true nature revealed.