This Is the New Sound 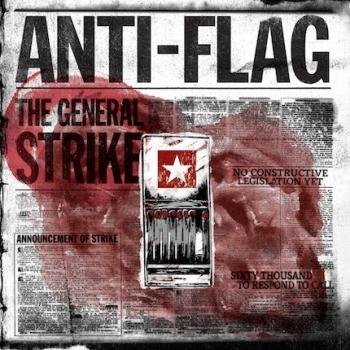 "This Is The New Sound" video was shot at the historic Ohio State Reformatory, the same prison where Shawshank Redemption was filmed.

"The erosion of human rights should always be taken seriously," said Anti-Flag band members. "We wanted to find a creative and clever way to introduce these ideas into the discourse about our new record, 'The General Strike.' This video is a culmination of that idea. Sure, maybe we will talk about how funny it is to see puppets beating the hell out of us, but we'll also discuss the fact that people are being held in prisons, without fair trials, and President Obama's promise to shut down Guantánamo Bay remains unfulfilled."

The National Defense Authorization Act (NDAA) makes it more likely that anyone -- including U.S. citizens -- could be held indefinitely without charge or fair trial. A person could be like Shaker Aamer, who has been held by the U.S. government at Guantánamo Bay detention center for more than 10 years without charge or fair trial, despite the British government's request that he be released to his wife and children in London. Like all people held without charge by governments around the world, Mr. Aamer should be charged and fairly tried or released. The right to a fair trial protects everyone from abuse.

"The passage of the NDAA represents a further erosion of human rights in the United States, and we are excited to be partnering with Anti-flag to help get this message out to a wider audience," said Tom Parker, policy director for (counter)terrorism and human rights for Amnesty International USA.

Amnesty International is a Nobel Peace Prize-winning grassroots activist organization with more than 3 million supporters, activists and volunteers in more than 150 countries campaigning for human rights worldwide. The organization investigates and exposes abuses, educates and mobilizes the public and works to protect people wherever justice, freedom and dignity are denied.

That alarm clock ringin’ in your ear,

But you got nothing to cheer or shout about,

Just a nine to five in a lousy town.

Your morning begins,
With you thinkin’ of the cold of the street blown’ in your face.

Your morning begins with you thinkin’:
“One more day in this job and I’m gonna scream!”

So stand up
And step out,

Step out to the new sound.

Only to realize that they don’t give a fuck about you!

Your morning begins,
With you thinkin’ of the cold of the street blowing in your face.

Your morning begins with you thinkin’:
“One more day in this life and I’m gonna scream!”

So stand up,
Step out,
Step out to the new sound.

And when they try to put you down put you on your back,

But you don’t take that you knock ‘em out!