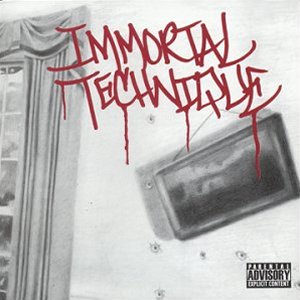 The new age is upon us
And yet the past refuses to rest in its shallow grave
For those who hide behind the false image of the son of man
shall stand before God!!! It has begun
The beginning of the end
Yeah..
Yeah... yeah, yeah

[Verse 1]
The voice of racism preaching the gospel is devilish
A fake church called the prophet Muhammad a terrorist
Forgetting God is not a religion, but a spiritual bond
And Jesus is the most quoted prophet in the Qu'ran
They bombed innocent people, tryin' to murder Saddam
When you gave him those chemical weapons to go to war with Iran
This is the information that they hold back from Peter Jennings
Cause Condoleeza Rice is just a new age Sally Hemmings
I break it down with critical language and spiritual anguish
The Judas I hang with, the guilt of betraying Christ
You murdered and stole his religion, and painting him white
Translated in psychologically tainted philosophy
Conservative political right wing, ideology
Glued together sloppily, the blasphemy of a nation
Got my back to the wall, cause I'm facin' assassination
Guantanamo Bay, federal incarceration
How could this be, the land of the free, home of the brave?
Indigenous holocaust, and the home of the slaves
Corporate America, dancin' offbeat to the rhythm
You really think this country, never sponsored terrorism?
Human rights violations, we continue the saga
El Savador and the contras in Nicaragua
And on top of that, you still wanna take me to prison
Just cause I won't trade humanity for patriotism

[Hook]
It's like MK-ULTRA, controlling your brain
Suggestive thinking, causing your perspective to change
They wanna rearrange the whole point of view of the ghetto
The fourth branch of the government, want us to settle
A bandana full of glittering, generality
Fighting for freedom and fighting terror, but what's reality?
Read about the history of the place that we live in
And stop letting corporate news tell lies to your children

[Verse 2]
Flow like the blood of Abraham through the Jews and the Arabs
Broken apart like a woman's heart, abused in a marriage
The brink of holy war, bottled up, like a miscarriage
Embedded correspondents don't tell the source of the tension
And they refuse to even mention, European intervention
Or the massacres in Jenin, the innocent screams
U.S. manufactured missles, and M-16's
Weapon contracts and corrupted American dreams
Media censorship, blocking out the video screens
A continent of oil kingdoms, bought for a bargain
Democracy is just a word, when the people are starvin'
The average citizen, made to be, blind to the reason
A desert full of genocide, where the bodies are freezin'
And the world doesn't believe that you fightin' for freedom
Cause you fucked the Middle East, and gave birth to a demon
It's open season with the CIA, bugging my crib
Trapped in a ghetto region like a Palestinian kid
Where nobody gives a fuck whether you die or you live
I'm tryin' to give the truth, and I know the price is my life
But when I'm gone they'll sing a song about Immortal Technique
Who beheaded the President, and the princes and sheiks
You don't give a fuck about us, I can see through your facade
Like a fallen angel standing in the presence of God
Bitch niggaz scared of the truth, when it looks at you hard

[Hook]
It's like MK-ULTRA, controlling your brain
Suggestive thinking, causing your perspective to change
They wanna rearrange the whole point of view in the ghetto
The fourth branch of the government, want us to settle
A bandana full of glittering, generality
Fighting for freedom and fighting terror, but what's reality?
Martial law is coming soon to the hood, to kill you
While you hanging your flag out your project window

[Talking]
Yeah..
The fourth branch of the government AKA the media
Seems to now have a retirement plan for ex-military officials
As if their opinion was at all unbiased
A machine shouldn't speak for men
So shut the fuck up you mindless drone!
And you know it's serious
When these same media outfits are spending millions of dollars on a PR campaign
To try to convince you they're fair and balanced
When they're some of the most ignorant, and racist people
Giving that type of mentality a safe haven
We act like we share in the spoils of war that they do
We die in wars, we don't get the contracts to make money off 'em afterwards!
We don't get weapons contracts, nigga!
We don't get cheap labor for our companies, nigga!
We are cheap labor, nigga!
Turn off the news and read, nigga!
Read... read... read...