>>> The German translation seems to be a bit of a mess. 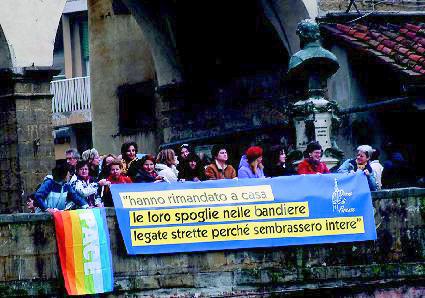 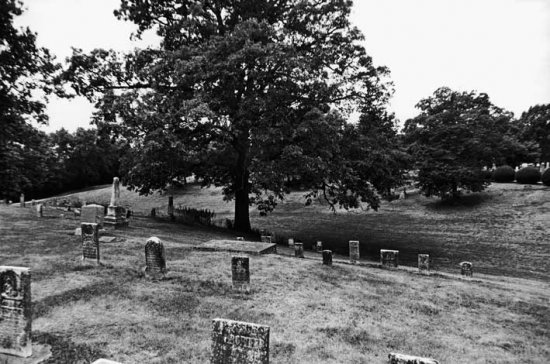 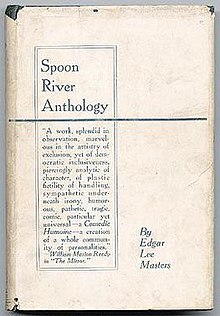 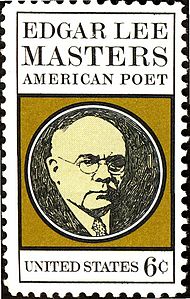 
"The Hill" is the opening poem of The Spoon River Anthology and sets the stage for the book's 240 poems from 212 different characters that follow. - Dennis Criteser
THE HILL

Where’d Elmer go,
Who left himself to die of fever?
Where’s Herman, burned in a mine?
Where are Bert and Tom,
The first one killed in a brawl
And the other who got out of jail dead already?
And what of Charley,
Who fell while working?
From a bridge he flew, flew onto the road.

Where are Ella and Kate,
Both dead by mistake,
One from an abortion, the other of love?
And Maggie, killed in a brothel
By the caresses of a brute?
And Edith consumed by a strange illness?
And Lizzie who pursued life
Far away, and from England
Was carried back to this palm of earth?

Where are the generals,
Who decorate themselves in the battles
With cemeteries of crosses on their chests?
Where the sons of the war,
Departed for an ideal,
For a fraud, for a love that ended poorly?
They sent home
Their remains wrapped in flags,
Bound tight so they seemed of one piece.

Where is Jones the player,
Who was surprised by his ninety years
And would still have played with life?
He who offered his face to the wind,
His throat to the wine, and never a thought
To money, to love, nor to heaven.
Yes, it seems one can hear him
Still prattling on about the crap
Eaten on the streets in the wrong hours.


It seems you can still hear him
Saying to the liquor merchant:
“You who sell it, what do you buy for yourself that’s better?” 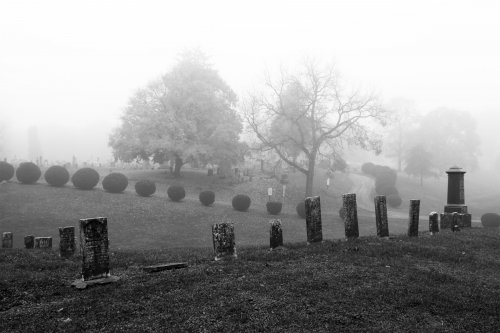 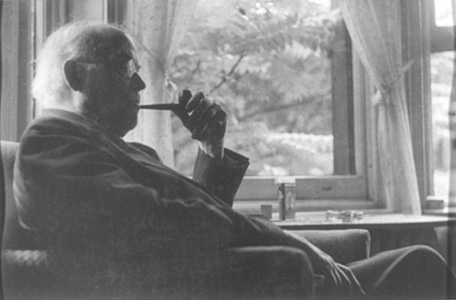 Spoon River Anthology: First edition, McMillan Publishing Company, 1915
Spoon River Anthology (1915), by Edgar Lee Masters, is a collection of short free verse poems that collectively narrates the epitaphs of the residents of Spoon River, a fictional small town named after the Spoon River, which ran near Masters' home town of Lewistown, Illinois. The aim of the poems is to demystify rural and small town American life. The collection includes 212 separate characters, in all providing 244 accounts of their lives, losses, and manner of death. Many of the poems contain cross-references that create an unabashed tapestry of the community. The poems originally were published in 1914 in the St. Louis, Missouri literary journal Reedy's Mirror, under the pseudonym Webster Ford.

The first poem serves as an introduction. Each following poem is an autobiographical epitaph of a dead citizen, delivered by the dead themselves. Characters include Tom Merritt, Amos Sibley, Carl Hamblin, Fiddler Jones and A.D. Blood. They speak about the sorts of things one might expect: Some recite their histories and turning points, others make observations of life from the outside, and petty ones complain of the treatment of their graves, while few tell how they really died. The subject of afterlife receives only the occasional brief mention, and even those seem to be contradictory. Speaking without reason to lie or fear the consequences, they construct a picture of life in their town that is shorn of façades. The interplay of various villagers — such as a bright and successful man crediting his parents for all he's accomplished, and an old woman weeping because he is secretly her illegitimate child — forms a gripping, if not pretty, whole.

Many of the characters who make appearances in Spoon River Anthology were based on people that Masters knew or heard of in the two towns in which he grew up: Petersburg and Lewistown, Illinois. Masters sometimes substantially disguised the names of these real-life inspirations, but he sometimes disguised them only barely and, in a few cases, not at all. Most notable is Ann Rutledge, regarded in local legend to be Abraham Lincoln's early love interest (though there is no actual proof of such a relationship); Masters heard this legend from his grandfather. Rutledge's grave can be found in a Petersburg cemetery, and a tour of graveyards in both towns, especially Oak Hill Cemetery in Lewistown, reveals most of the surnames that Masters applied to his characters.

After growing up and leaving Lewistown for Chicago, Masters met and befriended William Marion Reedy, the owner, publisher and editor of the St. Louis-based literary magazine Reedy's Mirror. By the time Masters wrote the poems that became Spoon River Anthology, he had published some poetry with some success; these prior poems, however, were more conventional in style and subject matter. Masters later wrote that it was Reedy, through his criticism and friendship, who encouraged him to write “something more distinctive than what I was doing, somehow, someway, but without telling me how to do it.” Masters in particular credited Reedy with introducing him to the Greek Anthology, a collection of classical period epigrams, to which Spoon River Anthology is stylistically similar.

Spoon River Anthology originally was published in serial form in Reedy's Mirror from May 29, 1914 until January 5, 1915. The poems were attributed initially to the pseudonym Webster Ford. William Marion Reedy, owner, publisher and editor of the magazine revealed the poems’ true authorship in November 1914, after 21 weekly entries.

The first bound edition of Spoon River Anthology was published by The Macmillan Company in 1915 with a total of 209 poems. Masters added 35 new poems in the 1916 edition, expanding on new characters with connections to some of the originals. Among these new additions were "Andy the Night-Watch", "Isa Nutter," "Plymouth Rock Joe" and "The Epilogue."

Spoon River Anthology was a critical and commercial success. Ezra Pound's review of the Spoon River poems begins: "At last! At last America has discovered a poet." Carl Sandburg's review is similarly glowing: "Once in a while a man comes along who writes a book that has his own heart-beats in it. The people whose faces look out from the pages of the book are the people of life itself, each trait of them as plain or as mysterious as in the old home valley where the writer came from. Such a writer and book are realized here." The book sold 80,000 copies over four years, making it an international bestseller by the standards of the day.

Meanwhile, those who lived in the Spoon River region objected to their portrayal in the anthology, particularly as so many of the poems' characters were based on real people. The book was banned from Lewistown schools and libraries until 1974. Even Masters's mother, who sat on the Lewistown library board, voted for the ban. (Masters claimed "My mother disliked [the anthology]; my father adored it.") Despite this, the anthology remained widely read in Lewistown; local historian Kelvin Sampson notes that "Every family in Lewistown probably had a sheet of paper or a notebook hidden away with their copy of the Anthology, saying who was who in town."

Masters capitalized on the success of The Spoon River Anthology with the 1924 sequel The New Spoon River, in which Spoon River became a suburb of Chicago and its inhabitants have been urbanized. The second work was less successful and received poorer reviews. In 1933, Masters wrote a retrospective essay on the composition of The Spoon River Anthology and the response it received, entitled "The Genesis of Spoon River." He recounts, among other things, the "exhaustion of body" that befell him while writing, which eventually manifested in pneumonia and a year-long bout of illness as the work was being prepared for publication. He claims that the Lewistown residents who strove to identify the poems' characters with real people did so only "with poor success."

More recently, Lewistown celebrated its relationship to Masters's poetry. The Oak Hill Cemetery features a memorial statue of Masters and offers a self-guided walking tour of the graves that inspired the poems. In 2015, the town celebrated the 100th anniversary of the anthology's publication with tours, exhibitions, and theatrical performances.

Today Spoon River Anthology often is assigned in high school and college literature classes and as a source of monologues for theatrical auditions. It is also often used in second-year characterization work in the Meisner technique of actor training.

Spoon River Anthology is credited as an initial inspiration for the "audio log" storytelling device in video games as it first appeared in the game System Shock, a narrative technique that became a standard trope of narrative games. - en.wikipedia

Where are Elmer, Herman, Bert, Tom and Charley,
The weak of will, the strong of arm, the clown, the boozer, the fighter?
All, all are sleeping on the hill.

Where are Ella, Kate, Mag, Lizzie and Edith,
The tender heart, the simple soul, the loud, the proud, the happy one? --
All, all are sleeping on the hill.

One died in shameful child-birth,
One of a thwarted love,
One at the hands of a brute in a brothel,
One of broken pride, in the search for heart's desire,
One after life in far-away London and Paris
Was brought to her little space by Ella and Kate and Mag --
All, all are sleeping, sleeping, sleeping on the hill.

Where is Old Fiddler Jones
Who played with life all his ninety years,
Braving the sleet with bared breast,
Drinking, rioting, thinking neither of wife nor kin,
Nor gold, nor love, nor heaven?
Lo! he babbles of the fish-frys of long ago,
Of the horse-races of long ago at Clary's Grove,
Of what Abe Lincoln said
One time in Springfield. 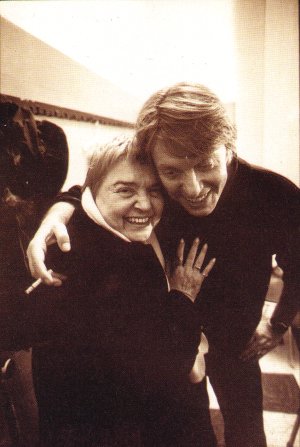 "I was just a kid when I read Spoon River for the first time: Cesare Pavese brought it to me, one morning when I had asked him what was the difference between American and English literature." - Fernanda Pivano. 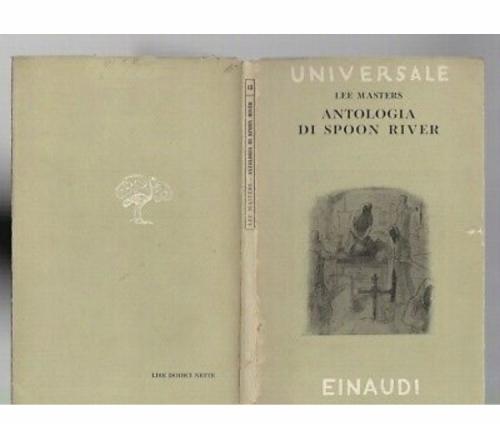 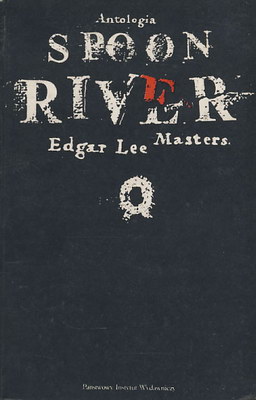 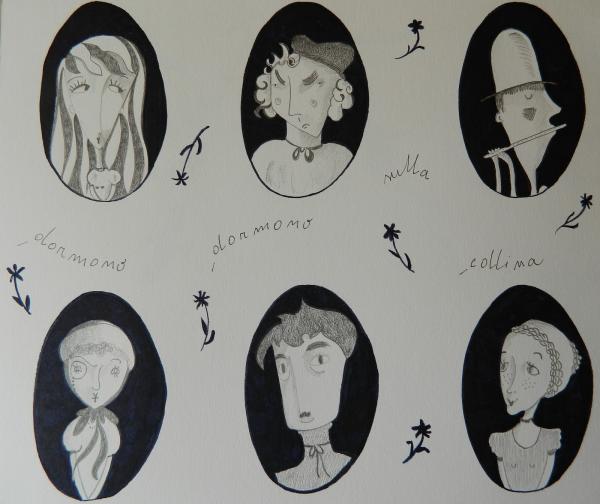 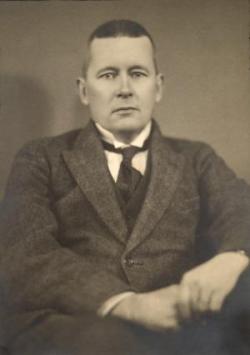 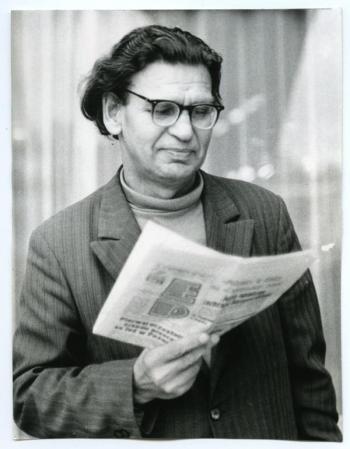 Watch the video, listen to the song, read the lyrics and the comments at http://tangoitalia.com/fabrizio_de_and... 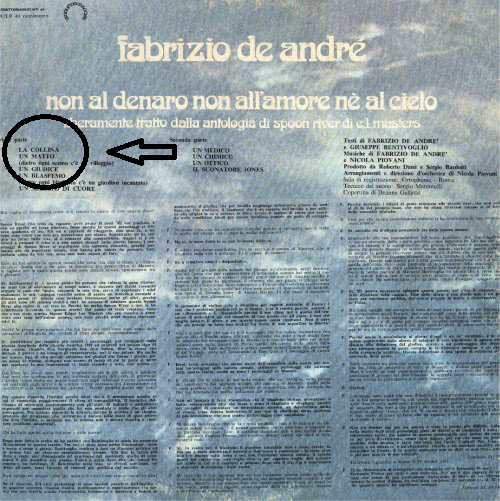 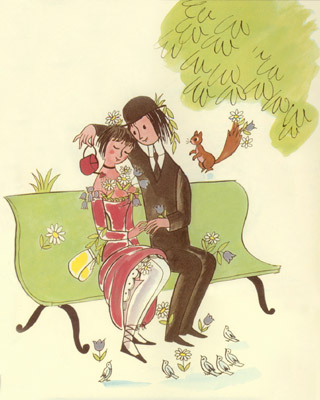 The German translation seems to be a bit of a mess.