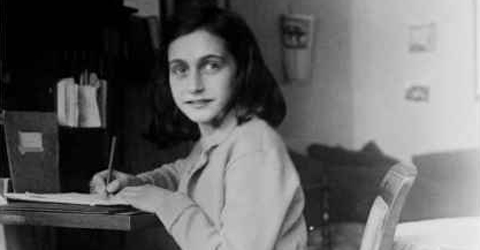 
Tribute To Anne Frank: The Frank family hid in an attic in WWII to escape Nazi Persecution, Anne wrote her famous Diary of Anne Frank about the time they spent there.

This song was accepted into the special Archives at The Anne Frank Museum, Amsterdam Holland. It is on my album Tribute To World Heroes Friends And Places.
Anne Frank was a girl in Holland, 1942…
She wrote a private diary
not meant for me and you.
Just a young girls embosoming
no one will care she said.
Now millions world wide have seen
her diary and have read.

She wrote about the Nazi hate
exterminating Jews.
Where the Franks hid from the roundup
the fear in World War II.
She dug deep into the demons
of the world in which they sank.
She recorded how it felt to live as
A "secret annex" Frank.

I know the hand of god has brought her
Diary to the world.
Such poetry and insight
in a little skinny girl.
Her story has survived beyond
the Nazi lies and Death.
The truth is in the "Diary of Anne Frank" that I have read.

The truth is in the "Diary Of Anne Frank" that I have read.

Her Story has survived
beyond the Nazi lies and death.
The truth is in the "Diary of Anne Frank" that I have read.

Russ McDaniel Music Ministry
Charter April 26, 2015 Spot light: Truth
• Mankind is born to Liberty
• God needs all individuals to use their spiritual gifts unimpeded
• Free to act under Gods plan, not forced to act on plans not from God but man
• We get guidance from the holy spirit for Gods work
• Liberty : our "Authority" to do Gods work for mankind