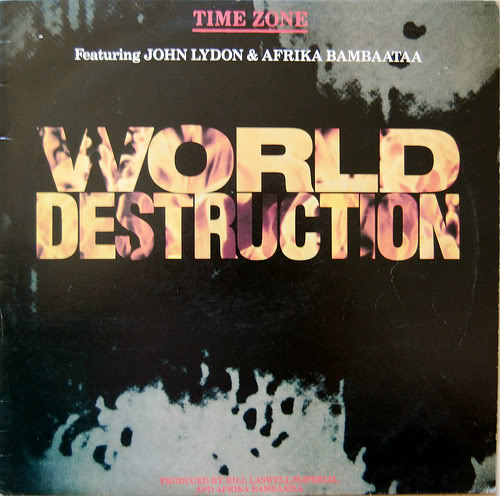 
The presence of both a former Sex Pistol and a live band doesn’t fool anyone in this awesome Anti-Reagan gem — This song is all Bambaataa’s. An eerie, early-issue keyboard and Lydon’s abysmal sing-rapping add to the kitch-factor, and the video is pure nostalgia for anyone who was around before MTV made the scene. “World Destruction” takes on capitalism, communism, religion, and just about anything else that makes the rich richer and the poor poorer. Dated, yes — but awesome all the same.

This is a world destruction, your life ain't nothing.
The human race is becoming a disgrace.
Countries are fighting with chemical warfare.
Not giving a damn about the people who live there.
Nostradamus predicts the coming of the Antichrist.
Hey, look out, the third world nations are on the rise.
The Democratic-Communist Relationship,
won't stand in the way of the Islamic force.
The CIA is looking for you.
The KGB is smarter than you think.
Brainwash mentalities to control the system.
Using TV and movies - religions of course.
Yes, the world is headed for destruction.
Is it a nuclear war?
What are you asking for?

This is a world destruction. Your life ain't nothing.
The human race is becoming a disgrace.
The rich get richer.
The poor are getting poorer.
Fascist, chauvinistic government fools.
People, Moslems, Christians and Hindus.
Are in a time zone still searching for the truth.
Who are you to think you're a superior race?
Facing forth your everlasting doom.
We are Time Zone. We've come to drop a bomb on you.
World destruction, kaboom, kaboom, kaboom!

This is the world destruction, your life ain't nothing.
The human race is becoming a disgrace.
Nationalities are fighting with each other.
Why is this? Because the system tells you.
Putting people in faceless categories.
Knowledge isn't what it used to be.
Military tactics to control a nation.
Who wants to be a president or king? Me!
Mother Nature is gonna work against you.
Nothing in your power that you can do.
Yes, the world is headed for destruction.
You and I know it, cause the Bible tells you.
If we don't start to look for a better life,
the whole world will be destroyed in a time zone!