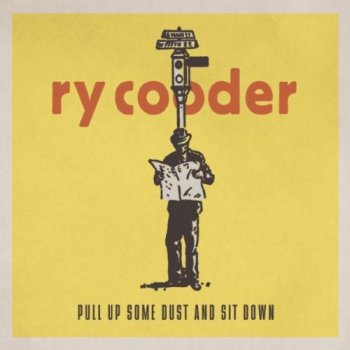 Pull Up Some Dust and Sit Down is the fourteenth studio album by American recording artist Ry Cooder, released August 30, 2011, on Nonesuch Records. It was written and produced by Cooder and recorded at Drive-By Studios, Ocean Studios, and Wireland Studios in California. Inspired by the late-2000s economic crisis and past protest songs, the album features topical songs about contemporary subject matter in 21st-century America, including politics, war, economic disparity, and social injustice. Its music is rooted in Americana and incorporates traditional styles and musical language from historical sources such as country blues, tejano, and American roots music. The album has been noted by music writers for its eclectic musical range, allegorical songs, working-class perspective, and Cooder's sardonic lyrics.
Although it charted modestly in the United States, the album attained relatively higher charting in European countries, including Ireland, the United Kingdom, and Norway, where it reached its highest chart position. Upon its release, Pull Up Some Dust & Sit Down received general acclaim from music critics, who praised its diverse sound, trenchant commentary, and Cooder's musicianship. Several critics drew comparisons of Cooder to singer-songwriter and folk musician Woody Guthrie.
"Christmas Time This Year" is an anti-war song with a Mexican polka style, with Flaco Jiménez on accordion and Cooder on bajo sexto. Composed as a corrido, the song is about wounded soldiers returning home for Christmas, with dismal lyrics set incongruously to an upbeat Mexican melody. Cooder wrote the song in response to the Walter Reed Army Medical Center neglect scandal and previous stories of neglected soldiers returning from the Iraq War...
Our boys and girls will be here soon coming home from war
I'm so glad it's Christmas time this year..
But they'lI be going back to war again I fear
Can't they stay for Christmas time this year..
Now Johnny ain't got no legs and Billy ain't got no face
Do they know it's Christmas time this year?
Tommy looks about the same but his mind is gone
Does he know it's Christmas time this year?..