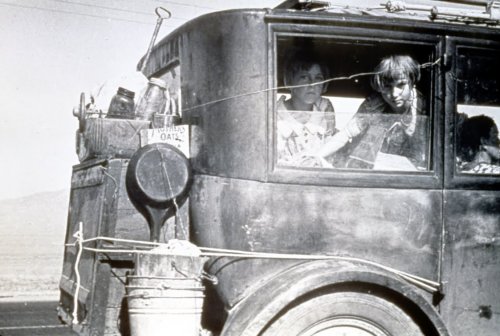 
Si vedano anche, sempre di Guthrie, Dust Bowl Refugee, I Ain't Got No Home (In This World Anymore) e Tom Joad.
Back in Nineteen Twenty-Seven,
I had a little farm and I called that heaven.
Well, the prices up and the rain come down,
And I hauled my crops all into town --
I got the money, bought clothes and groceries,
Fed the kids, and raised a family.

Rain quit and the wind got high,
And the black ol' dust storm filled the sky.
And I swapped my farm for a Ford machine,
And I poured it full of this gas-i-line --
And I started, rockin' an' a-rollin',
Over the mountains, out towards the old Peach Bowl.

Way up yonder on a mountain road,
I had a hot motor and a heavy load,
I's a-goin' pretty fast, there wasn't even stoppin',
A-bouncin' up and down, like popcorn poppin' --
Had a breakdown, sort of a nervous bustdown of some kind,
There was a feller there, a mechanic feller,
Said it was en-gine trouble.

Way up yonder on a mountain curve,
It's way up yonder in the piney wood,
An' I give that rollin' Ford a shove,
An' I's a-gonna coast as far as I could --
Commence coastin', pickin' up speed,
Was a hairpin turn, I didn't make it.

Man alive, I'm a-tellin' you,
The fiddles and the guitars really flew.
That Ford took off like a flying squirrel
An' it flew halfway around the world --
Scattered wives and childrens
All over the side of that mountain.

We got out to the West Coast broke,
So dad-gum hungry I thought I'd croak,
An' I bummed up a spud or two,
An' my wife fixed up a tater stew --
We poured the kids full of it,
Mighty thin stew, though,
You could read a magazine right through it.
Always have figured
That if it'd been just a little bit thinner,
Some of these here politicians
Coulda seen through it.