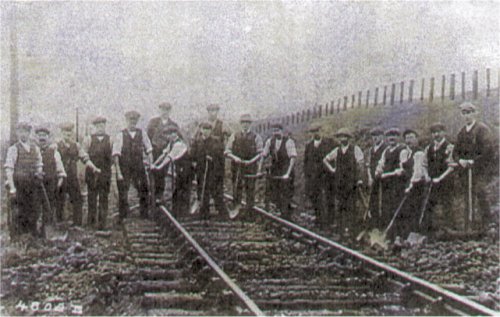 I stripped to the skin with Darky Finn
Down upon the Isle of Grain.
With Horseface Toole, I learned the rule,
No money if you stop for the rain.
For McAlpine's god is a well-filled hod
With your shoulders cut to bits and seared,
And woe to he who looks for tea,
With McAlpine's fusileers.

I remember the day that Bear O'Shea
Fell into a concrete stair.
What Horseface said when he saw him dead,
Well, it wasn't what the rich call prayer.
"I'm a navvy short!" was his one retort
That reached unto my ears.
When the going is rough, well, you must be tough
With McAlpine's fusileers.

I've worked till the sweat near had me beat
With Russian, Czech and Pole,
At shuttering jams up in the hydro dams
Or underneath the Thames in a hole.
I grafted hard and I got me cards
And many a ganger's fist across me ears.
If you pride your life, don't join, by Christ,
With McAlpine's fusileers.