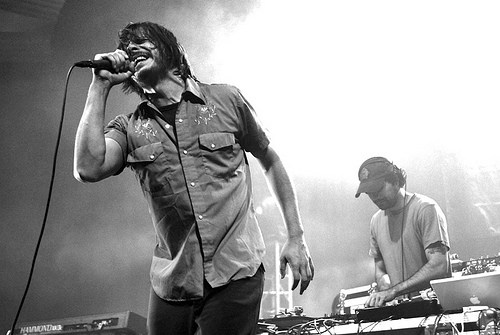 This freestyle, recorded over Nas's incredible 'Made You Look' beat, is a phenomenal example of radical street poetry. Williams passionately denounces the war on Iraq, and examines the irony of Black Americans becoming soldiers in the US Army: "We was the first type of oil that they ever stole … Now they want a deal and asking us to back them".
Now let's get it all in perspective
Shift the objective, you've been misdirected
What's the purpose of another song to step to
If you stepping in the wrong direction
Thug introspection,
Mindframe in the fast lane
Through with cocaine
Time's up, time to maintain
Before a nigga gets drafted
Cos you the number one pick, corn bread, cotton-crafted
Them people's army shot another brown kid today
And all you strapped little boys let 'em get away
So what you packin' for
You packin' for the war?
They gonna ship you out and put you and your mans on tour
Yeah, your Hummer came in handy
Son, your Air Force 1s are sandy
You'd better peep the plan, B
Before you call yourself a soldier,
Get caught up on the wrong side and your little party's over
Put your blunt down, no time to front now,
Put your drink down, time to think now
We on the brink now
Where my peeps at, where the streets at?
Same cats that stole you is using you to steal Iraq !

[Gunshot:] Yo, I say let 'em shoot
My tongue is my gun aiming for the truth
They got a silencer and aimin' straight at the youth
And all their talk of terrorism's nothing but a spoof..

We was the first type of oil that they ever stole
Nah, fuck the oil metaphor son, we was gold
But let the truth be told, we was platinum
Now they want a deal and asking us to back them

War – don't start none, won't be none
We fighting for freedom
Yeah they say they is but son I don't believe them
Cos when there's violence in the hood you never see them
Unless they starting it
They got their heart in it
Now they got you thinking money is power
You're counting dead pres by the hour
And the one that's living, the Bible thumping Christian
Like y'all niggaz trying to cross out the mission
Listen – power is vision
You're keeping it real in a neighbourhood that's government sealed
Yo, let the truth be revealed
Before your freedom has failed and the innocent killed..

[Gunshot:] Yo, I say let 'em shoot
My tongue is my gun aiming for the truth
They got a silencer and aimin' straight at the youth
And all their talk of terrorism's nothing but a spoof!
[x2]