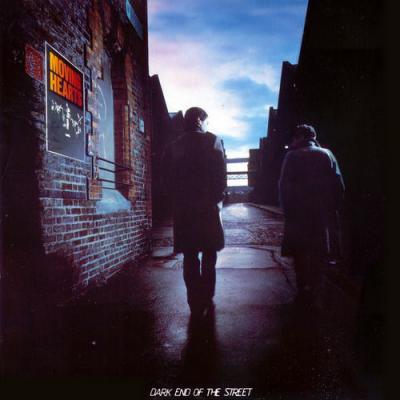 I have 3 versions of where I heard this song.

1. On AFN radio late one night I heard Peggy Seeger sing it out of Franfurt.(unlikely).
2. I heard Don Lange sing it in The Meeting Place Dorset St. Dublin.(even more unlikely).
3. The Dir. of L.E. in R.T.E. sent me a cassette after hearing me sing El Salvador(by Johnny Duhan) in The Felons Club In Andytown.( poss.).

It is a powerful song which never loses its potency. I first recorded it with Moving Hearts in 1983( Dark End of The Street) and again in 2002 ( ive at Vicar St.)
The author still writes,sings and records and,I am glad to say still sends me the occasional song


Christy Moore
The nighthawk flies and the owl cries as we're driving down the road.
Listening to the music on the all night radio show,
The announcer comes on says if you've got ideas I'll file the patent for you,
What's an idea if it's not in the store makin' a buck or two.
We drive to the town but the shutters are down and the all-night restaurant's closed
Its the land of the free,we've got booze and T.V. and there's tramps in the telephone booths.
The stars and the trees and the early Spring breeze say forget what assassins have done,
Take our good soil in the palm of your hands and wait for tomorrows sun.

Its a long way from the heartlands
to Santiago bay
Where the good doctor lies with blood in his eyes
and the bullets read U.S.of A.

A truck driver's wife she leads a rough life he spends his life on the road.
Carrying the goods all the copper and wood thats what makes America great,
But the dollars like swallows they fly to the South where they know they've got something to gain,
Allende is killed, and the trucks are soon rolling again.

The nighthawk flies and the owl it cries as we're driving down the road,
The full moon reveals all the houses and fields where good people do what they're told,
Victor Jara he lies with coins in his eyes there's no one around him to mourn,
Who needs a poet who won't take commands who'd rather make love then war.

Its a long way from the heartlands
to Santiago bay
Where the good doctor lies with blood in his eyes
and the bullets read U.S.of A.